Skip to the beginning of the images gallery
STANLEY, Henry Morton.

The Congo and the Founding of its Free State.

A Story of Work and Exploration. 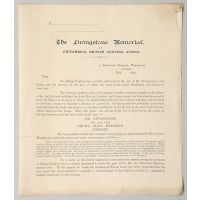 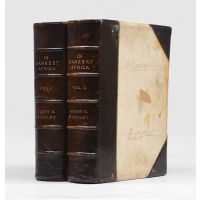 First edition, scarce in the original cloth. Stanley's self-justificatory account of "opening up the Congo" (ODNB) for Leopold II of the Belgians documents one of the most appalling episodes in the European "Scramble for Africa". A work of official propaganda, it stands as a valuable record of the avowed motivations of the colonial enterprise; Stanley was "obliged by his original contract with Leopold to allow the king to prohibit publication, if he wished, and to make editorial changes to any book he might write about his work in the Congo. The king also had the right to approve the final text. The copy of the book's manuscript, which Leopold is known to have cut and altered, has disappeared and was probably destroyed by him" (Tom Jeal, Stanley: The Impossible Life of Africa's Greatest Explorer, 2008).

"Although it did not involve any significant geographical discoveries, Stanley considered his work on the Congo to be among the most important of his life. His book The Congo and the Founding of its Free State promoted what he called the 'gospel of enterprise', emphasizing both the commercial potential of the region and the hard labour necessary to exploit it. He revelled in the name Bula Matari 'Breaker of Rocks' from his road-building activities portraying his aim in the Congo as nothing less than the conquest of nature The establishment of the Congo Free State, a territory of nearly 1 million square miles which Stanley had done much to secure, was one of the most significant events in the history of the so-called 'scramble for Africa'. Subsequent events were to show that Leopold's ambitions were not quite so philanthropic as Stanley represented them. But he denied to the last any responsibility for the atrocities that were to follow" (ODNB). There is a terrible irony in the choice of cover design, which shows a bust of Leopold, the plinth blazoned with the arms of Belgium, being crowned with a laurel wreath by the figure of "Africa", while two Congolese children look on admiringly. In his essay "Geography and some explorers" (1924) Conrad called the "opening" of Africa, "the vilest scramble for loot that ever disfigured the history of human conscience".