Skip to the beginning of the images gallery
MORTIMER, Thomas.

In Three Treatises on those important Subjects. Designed as a Supplement to the Education of British Youth, after they quit the public Universities or private Academies. 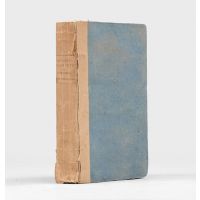 Lectures on the Elements of Commerce, Politics, and Finances;

First Edition of Mortimer's most important work. Thomas Mortimer (1730-1810) was a major English mercantilist, one of the earliest experts on the operation of the stock exchange established in the coffee-house of London's Change Alley, having lost "a genteel fortune" himself in speculating there. His earlier work, Every Man His Own Broker (1761 and frequently reprinted), is considered the first guide to the stock exchange and was fiercely critical of the activities of "stock-jobbers".

The Elements of Commerce is his most substantial economic treatise, as reflected in its authoritative large quarto format. It retains much material on the stock market from his earlier work, including his famous explanation of bull and bear markets, augmented with excellent sections on the benefits of the American colonies and of Indian affairs, as well as on the origin of the Bank of England and banks in general. His text is preceded by a long list of authors consulted, and he discusses the theories of Berkeley, Hume, Pinto, Postlethwayt, Price and others. Mortimer, who also translated Isaac de Pinto's laudatory account of English public finance, Traité de la Circulation et du Crédit, was an early defender of public credit as "a National good a masterpiece of human policy" and a "bulwark of the state", arguing here that the funds helped prevent arbitrary power, because no monarch would act capriciously for fear of undermining the public confidence on which the funds relied. "These may have been minority views, but their assertion by Mortimer reflected a new-found confidence among the defenders of the national debt" (John Brewer, The Sinews of Power: War, Money and the English State, 1688-1783, Unwin Hyman, 1989).

Mortimer has been praised in particular for a mature assessment of the labour problem, enlarging on Hume's treatment of the subject but asserting that the raising of wages was the best method of encouraging industry. This point was made more famously by Adam Smith in his Wealth of Nations only four years after this, and in the advertisement to the third edition of this work in 1780 Mortimer protested that he had been plagiarized by Smith without acknowledgement.

Lectures on the Elements of Commerce, Politics, and Finances;