Skip to the beginning of the images gallery
HOFFMANN, Heinrich. 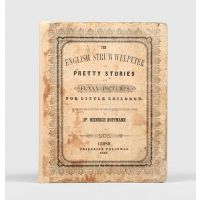 Scarce first edition in English of the children's picture book Der Struwwelpeter, among the rarest of all children's books due to the fragility of the publication.
A publishing phenomenon that is still in print today, The English Struwwelpeter first appeared as a German children's Christmas picture book, Dr Heinrich Hoffmann's Lustige Geschichten und drollige Bilder, of just 15 pages, published in 1845. The book was quickly expanded and renamed, with the character of a slovenly boy named Struwwelpeter accorded eponymous status. The English Struwwelpeter was initially produced with a similar binding to the German editions, consisting of strong boards with a flimsy spine, designed to fail quickly, so parents would be forced to buy another copy. "The book was an immediate success, being devoured by its readers to the extent that no copy is to be found in public collections in Britain, with comparatively few successor editions surviving during the whole run of the first version down to 1858" (Grolier).
Taken from the sixth German edition, and most likely translated into English by Alexander Platt (181983), it was an exceptionally popular book that played a key role in the history of international copyright. The English Struwwelpeter created a niche in the market for children's books, and British publishers soon began producing "Struwwelpetriades" (picture books in Struwwelpeter style). The attention that the publishers lavished on protecting the work was most unusual for a children's book. "This children's title was probably the greatest single German beneficiary of the first-ever major international copyright agreement. This was signed at Berlin on 13 May 1846 on behalf of the kingdom of Prussia and the United Kingdom, and became effective on 1 September 1846. The convention extended British copyright privileges to imported Prussian works, at the same time reducing import duty on them... Within Germany The English Struwwelpeter was obtainable direct from the Literarische Anstalt, but the Free City of Frankfurt was located outside the scope of the 1846 convention, and so Rütten & Loening were unable to access directly the benefits that British copyright protection would offer it in Britain. Accordingly, they arranged for publication to occur officially via a proxy in Leipzig, the thriving wholesale bookseller and publisher, Friedrich Volckmar... The 1846 Convention symbol was normally ink-stamped on a publication's titlepage. However, The English Struwwelpeter, lacking a conventional titlepage, was usually ink-stamped in the lower right quadrant of the front cover, and consequently the impression of the stamp is now often indistinct as a result of years of wear. We have found the stamp only on the first version of the book, prior to the re-drawn 12th edition of 1861. Not all extant copies are stamped but, among the copies of the first version which we have examined, the presence of an 1846 Convention stamp tends to correlate with the presence on the front cover of the name of the publishers' London agency, which suggests that unstamped copies were destined for sale outside Britain, for example in the United States or in Germany itself" (p. 393-397). The present copy is unstamped.

Illustrations throughout with hand-colour.

Board edges worn, endpapers renewed, first page apparently sometime cleaned and repaired, paper repairs to p. 24, some signs of handling and spotting throughout. A rare survival of this fragile publication.