Skip to the beginning of the images gallery
BEETON, Mrs Isabella.

Being a collection of economical recipes taken from her "Book of Household Management". Amply illustrated by a large number of appropriate and useful engravings. 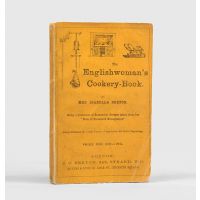 First edition of the first of Beeton's "cookery" books; the affordable spin-offs from her Book of Household Management (1861). Although the Book of Household Management is largely remembered as Beeton's legacy it was primarily these cheaper "part-issues, spin-offs, and extracts" which most influenced English cooking habits (Beetham, p. 395). The present work, sometimes referred to as Mrs Beeton's Shilling Cookery Book, appeared in several editions into the 1880s. In 1890 it was reissued under the title Mrs Beeton's Cookery Book and Household Guide, later shortened to Mrs Beeton's Cookery Book. The work contains recipes included in the Book of Household Management, many of which were derived from recipes printed in the Beeton's tuppenny Englishwoman's Domestic Magazine, which Samuel Beeton had launched in 1852, and Isabella edited from their marriage in 1857. Many of the recipes reflect the affordable cost of this work, including a "Half-pay Pudding" on p. 164, the corner of which has been previously folded to mark the page. "Beeton herself apparently believed that one of the most important contributions of her work to improving English cooking was the attention she gave to new and enticing ways of dishing up the left-over meat from the previous day" (ibid., p. 396). The work also demonstrates the combination in everyday cooking of the "French-influenced cookery found in restaurants, at court, and in the great houses of the aristocracy", such as the recipe for "Veal à la Bourgeoise (Excellent)" on p. 110, and the more recently introduced Indian fare, such as the "Bengal recipe for making mango chutney" on p. 68 (Zlotnick, p. 59). Beeton notes that this recipe was "given by a native to an English lady, who had long been a resident in India, and who, since her return to her native country, has become quite celebrated amongst her friends for the excellence of this Eastern relish" (Beeton, p. 68). Zlotnick suggests that "If memsahibs European women in colonial India returning to England integrated curry and rice into the dinners they served family and friends, middle-class women like Eliza Acton and Isabella Beeton introduced curry to an even wider audience" (Zlotnick, p. 59). The work, which was frequently used in the kitchen, is unsurprisingly scarce institutionally, with just three copies traced worldwide, all held in the UK (University of Cambridge, British Library, Townend National Trust), and just a single copy of this first edition traced at auction.

With 4 pages of publisher's advertisements and a 4 page publisher's Christmas catalogue dated December 1862, printed on pink paper, at end. Numerous engravings of both food and utensils in the text.