Skip to the beginning of the images gallery
ELLIS, Sarah Stickney. 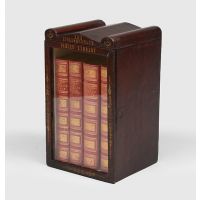 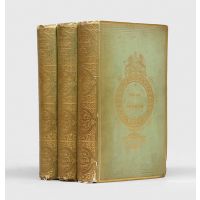 A handsome set of Ellis's four most important works, housed inside the beautifully preserved publisher's glass-fronted presentation case and advertised together as "The Englishwoman's Family Library". While individual volumes of Ellis's works in varying editions do occasionally appear at auction, we can trace no uniform sets, nor any together with the case.
"The most popular writer of Victorian conduct fiction", Sarah Stickney Ellis (1799-1872) published some thirty-four books, including educational tracts, conduct manuals, poetry, biographical sketches, and novels (Orlando). The best known were her four phenomenally successful advice books addressed to a middle-class female readership - The Women, Daughters, Wives and Mothers of England - published between 1839 and 1843. Focused on the role of women in the middle-class family, these domestic manuals emphasised the duty that Christian women had in exercising moral influence over the men in their lives - not a surprising perspective, given that Ellis had recently converted to the Congregational Church and was wife to the anthropologist and missionary William Ellis. With modern sensibilities it is tempting - as many of her female contemporaries certainly did - to simply dismiss Ellis's work, which promotes suffocating ideologies of womanhood, separate gendered spheres, and the 'Angel in the House' paragon, out of hand. However, recent scholarship has started to reassess her contribution to women's writing in more complex ways, such as the enormous influence Ellis had upon periodicals like the The Ladies' Monthly Magazine, which perpetuated "in serial form the female advice book tradition to which Ellis is probably the single most important Victorian contributor" (Ogden, p. 590). Critics Karen Chase and Michael Levenson have even argued that Ellis "must stand alongside Dickens as one of the deep designers of the mid-century family imagination In her resolve to write speedily and to publish widely, to win many readers and to earn significant sums, Stickney was, and knew herself to be, a member of a remarkable generation of women writers, who understood that turns in the publishing market and in popular taste meant that they could achieve the material success of literary production" (pp. 66-7). Mirroring this renewed interest, The Women of England was reissued by Cambridge University Press in 2010.
The wooden presentation case is advertised in the 10-page publisher's catalogue for 1843 bound in at the rear of The Mothers of England, in which Fisher, Son & Co. offer a "Unique and Elegant Present: The Englishwoman's Family Library", with Ellis's four works sold in a variety of bindings including, as here, "bound uniformly, and enclosed in a Morocco Case, with Glass Front and Lettered", in "Cloth, elegant, gilt edges, 2l. 7s". The case, charmingly illustrated in the advertisement, is "10s. extra; and may be had separately". There are a few differences between the prototype illustration and the finished product - the promised morocco has become a less expensive leather (a common disparity in the publishing world), and the box height is not quite flush with the top of the volumes - which points to a slight disconnect between the publisher's ideal and the reality of the craftsmanship to hand at Fisher, Son & Co. By late 1843 the set and case were advertised as "ready" in several publications (The Athenaeum, issue 839, for example, lists them as "present-books for the season"), and they make repeat appearances in subsequent Christmas and New Year gift book suggestions.
In order of date of first publication, the four works are:
a) The Women of England. Their social duties, and domestic habits. London: Fisher, Son, & Co., n.d. Twentieth edition (stated on title page), first published 1839.
b) The Daughters of England. Their position in society, character & responsibilities. London: Fisher, Son, & Co., n.d. First published 10 January 1842, also published later the same year in New York. A German translation a few years later combined it in the same volume with The Women of England in German.
c) The Wives of England. Their relative duties, domestic influence, & social obligations. Dedicated, by permission, to the Queen. London: Fisher, Son, & Co., n.d. First published March 1843.
d) The Mothers of England. Their influence & responsibility. London: Fisher, Son, & Co., 1843. First published later in 1843.
The present copies are presumed to be later impressions, given their popularity and the speed at which they went from edition to edition.

Volumes in near-fine condition, the case expertly restored, with discreet work to the door's joint, skiver, and colouring.