Skip to the beginning of the images gallery
DE GAURY, Gerald. 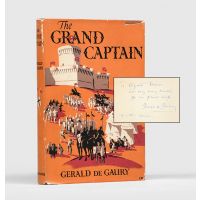 First edition, first impression, of the first full-length biography of the medieval Spanish general Gonzalo de Cordoba. Presentation copy, inscribed by the author on the front free endpaper: "To Elizabeth Kinnear With very many thanks for her patient help Gerald de Gaury 19.7.55. London". Inscribed copies are particularly scarce, for de Gaury moved to the Middle East shortly after publication.

Gonzalo de Cordoba (1453-1515) is regarded as one of the greatest generals in military history, "ranking, until the nineteenth century, with Hannibal, Alexander, Marlborough, and Turenne" (de Gaury). Born in Montilla and supported by the patronage of Queen Isabella of Castille, Gonzalo de Cordoba rose to prominence during the Granada Wars, when he captured the city of Granada, the last Muslim stronghold in Spain, using both his military might to besiege the city and his fluency in Arabic to negotiate a surrender. However he is best known for his tactical brilliance; through the exploitation of new tactical and strategic ideas, including the use by infantry of gunpowder for the first time, the reorganisation of his troops into special assault columns, and the use of mines in warfare, Gonzalo de Cordoba routed the French armies in southern Italy, and demonstrated himself as perhaps the first modern general to emerge from a declining medieval military tradition.

Gerald Simpson Hillairet Rutland Vere de Gaury (1897-1984), was commissioned second lieutenant Hampshire Regiment in 1914, and fought on the Western Front and at Gallipoli, being wounded on four occasions, winning the Military Cross for his actions at Arras. During his convalescence de Gaury taught himself Arabic, which led to his secondment from the regular army for employment with the Iraq Levies in 1923, at the age of 26. Thereafter, his career as a soldier-diplomat was in the Middle East, where he travelled extensively. De Gaury counted the ruling powers in Kuwait, Iraq, and Saudi Arabia among his friends, and was one of the first Britons to visit the interior of the Arabian Peninsula and visit Riyadh. His other books include biographies of the kings of Iraq and Saudi Arabia and an account of his visit to Mecca.

Octavo. Original brown cloth, titles to spine in gilt. With the dust jacket.