Skip to the beginning of the images gallery
BIBLE; English; Authorized version.

containing the Old and the New Testaments; newly translated out of the original tongues, and with the former translations diligently compared and revised, by His Majesty's Special Command. 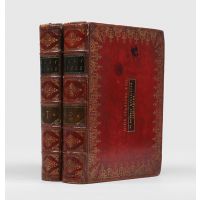 A handsomely printed Georgian Bible in a grand period binding, from the library of the prominent Liverpool merchant and slave trader John Sparling (1731-1800).

Both volumes are lettered in gilt on the front cover "John Sparling, Esqr." with dark brown morocco labels lettered "St. Domingo House, 1790. Lancashire"; also with the armorial bookplate of William Sparling (Petton) in the second volume; volume I (verso of front free endpaper) bearing brief family genealogy down to 1815.

"John Sparling was in partnership with William Bolden in the Virginia trade from the 1750s, importing turpentine, tar and tobacco and exporting salt, hardware and woollen goods. Sparling also had interests in at least 29 slaving voyages between 1767 and 1793, although it is impossible to identify the value of the separate elements of his business, as there is virtually no reference to his slave-trading activities in the surviving letter-book. Further complexity is generated by Sparling's leap into speculation in building land in the difficult trading conditions of the early 1770s. Property speculation tied up cash and was generally the preserve of non-mercantile investors but, with war looming and trade stagnant, Messrs Sparling and Company purchased 4.68 acres of a former market garden from Thomas Critchlow in about 1770. By 1772 they had laid out and paved Sparling Street. Together they may have received a net return of 150 per cent over approximately 15 years on this investment. Sparling's venture into property speculation paid handsome dividends on another front. He appears to have purchased land further south and to have paid for its embankment out into the River Mersey. This was sold to the Corporation in 1774/5 as the site of the intended Queen's Dock for 6,700, a phenomenal price, even taking into account the costs of embankment (1,450). It is tempting to conclude that Sparling's election to the Common Council in 1768 and mayoralty in 1770 were significant in giving him preferential knowledge of the Corporation's plans for dock construction. This windfall may have helped to fuel Sparling and Company's investment in privateering in the late 1770s, with at least five large vessels owned by the partnership during the American Revolutionary War. Thus, during the 1770s and 1780s Sparling had interests in the Virginia trade, slaving, privateering and land speculation. Much of the risk (and hence, the profit) was shared with his long-term business partner, William Bolden, so that the extent of Sparling's personal profits will probably never be known. Nonetheless, his career does shed further light on the mentality of the mercantile community and their attitude to wealth and status. It has long been assumed, for example, that social status was keenly sought alongside commercial success and that the profits of the trade, including slaving, were invested in country estates for this purpose. Yet for most of his 40 years in business Sparling resided in a large house in Duke Street, with his counting house to the rear in Henry Street. His partners, Bolden and, in the 1770s, the timber merchants, Edward Mason and Cornelius Bourne, all lived in the same fashionable area of south Liverpool. During this period, he also served as High Sheriff of Lancashire (1785) and Mayor of Liverpool (1770 and 1790). Sparling's interest in country property would therefore appear to have been only part of a complex web of investments in the early 1770s rather than a major quest for gentrification. He purchased the St Domingo estate, two miles from Liverpool in the village of Everton for 3,470 in 1773. The price included the curious mansion erected by George Campbell who had named the estate after the capture of several rich prizes off St Domingo in the West Indies in the 1750s. It was not until 1793 that Sparling began to completely remodel the house into an imposing classical mansion, simultaneously indulging his passion for beautiful trees. With meticulous attention to the after-life, Sparling also purchased a handsome vault in Walton churchyard visible from the windows of his mansion. Despite this lavish expenditure, two surviving letters from the late 1790s confirm that St Domingo had been used only occasionally until Sparling finally retired from business in 1799: "I observe by the newspapers you have advertised your house etc in Liverpool for sale, from which I conclude you are altogether retired from business and that you mean to make St Domingo your constant residence. Knowing your aversion to an indolent life I am not surprised at this step provided that you were determined to give up the bustle of commerce" letter to Sparling from Joseph Sherlock of Baltimore, 8 June 1799. Perhaps even more intriguingly Sparling had purchased an estate at Petton in Shropshire in about 1786 but does not appear to have resided there either. The 'indolent' life of a country gentleman may have been unappealing to a man steeped in 'the bustle of commerce'. By contrast, his son, William, was to show no apparent difficulty in distancing himself from trade, helped by his education at Eton and the purchase of a commission in an exclusive army regiment, the 10th Hussars. William Sparling moved permanently to the Shropshire estate in 1804 and appears to have cut all ties with Liverpool" (Jane Longmore, Rural retreats: Liverpool slave traders and their country houses, chapter 3 of Slavery and the British Country House, Dresser & Hann eds., English Heritage 2013, pp. 47-48).

Frontispiece by Grignion after Hayman; printed in double columns.