Skip to the beginning of the images gallery
BEDFORD, Francis, & W. M. Thompson.

A Series of Forty-Eight Photographs, taken by Francis Bedford, for H. R. H. the Prince of Wales during the Tour in the East, in which, by command, he accompanied his Royal Highness. With descriptive text and introduction by W. M. Thompson. 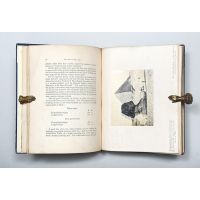 First edition thus, notably scarce, comprising some superb views of Egypt (10), Palestine (23), Lebanon (8), Syria (1), Constantinople (3), and Athens (3). Francis Bedford (1815-1894), one of the most important photographers of the period, his work characterised by it "rich tonalities" (ODNB), was the first photographer to accompany a Royal Tour.

In 1854 Queen Victoria and Prince Albert had bought examples of Bedford's work at the first annual exhibition of the Photographic Society and later that year commissioned him to photograph works of art from the Royal Collection. Thus, "when the Prince of Wales undertook an educational voyage of the Mediterranean, Egypt, the Holy Land, and Syria in spring 1862, Bedford was chosen to accompany the royal party and document the tour. Despite the many discomforts of heat, dust, and insects Bedford made over 200 negatives. A comprehensive selection was shown in London at the German Gallery, Bond Street, and published as a series of portfolios by Day & Sons, the most expensive of which cost 43 guineas, a price placing it well beyond the reach of all but the most wealthy" (ibid). Thompson draws attention to this in his introduction to the present edition, noting that "the size, and consequent costliness, of this work placing it, in its entire form, and even in smaller selections from it, beyond the reach of a large number of persons, who would otherwise have been glad to possess it, and a wish for a more convenient and inexpensive issue of the views having frequently been expressed, the present volume has been prepared, in which all the more interesting and important subjects are given, reproduced on a smaller scale by Mr. Bedford, and accompanied by brief explanatory text". The edition in three portfolios volumes comprising 172 images was published in 1863 under the title Photographic Pictures Made by Mr. Francis Bedford during the Tour in the East; a rare complete set selling for 132, 000 at Swann Galleries in 2009.

In her study of Bedford, Stephanie Spencer notes interestingly that "although promoted as an educational tour for the heir to the throne, the tour had an underlying political component prompted by international interventions and negotiations in the region in the aftermath of the recent Druse-Maronite conflict The Prince of Wales was not a typical tourist, and Bedford's photographs point up imperial attitudes and expectations in contact with a foreign country envisioned as different, and, quite possibly, less evolved than England. Not only addressing the question of national identity through contrast with an "Other," Bedford's photographs of ancient Egypt and the Biblical landscape raised questions about the past and the relation of past to present" (Francis Bedford, Landscape Photography and Nineteenth-Century British Culture: The Artist as Entrepreneur, 2011, p. 5).

Binding rather rubbed and stained, front cover a little cockled, a number of leaves a little tattered or creased at fore margin, pp. 7-8 with tape repairs to closed-tears at head, scattered foxing. A good, complete copy of a book that, when found, is often in rather shabby condition with loose plates, no doubt due to the drying of the gutta percha binding.