Skip to the beginning of the images gallery
HORSBURGH, James.

Compiled chiefly from original journals of the honourable company's ships, and from observations and remarks, resulting from the experience of twenty-one years in the navigation of those seas. 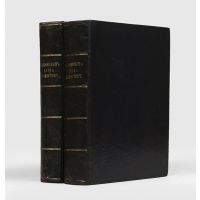 Scarce fifth edition of this important and justly famous publication, much enlarged in successive editions from the first of 1809-11, which was to become the standard manual for the eastern navigation; this copy with an excellent nautical pedigree, having passed through the hands of a trio of American sea captains.

Provenance: mounted on a preliminary blank in volume I is the label of John Brunton, Chronometer and Watch Manufacturer of America Square, London; below this the inscription "The Property of Erastus B. Chase, Bought of the above at London Mar. 28th 1863, Price 2 vol. 3.00.00". Chase, of Brooklyn, New York, was a ship's captain who sailed with the clipper Radiant; the Winterthur Library holds his letter book for 1874-78 and describes him as "a general agent for the Ellis Patent Gas Burner, Regulator, & Shade Combined; an associate with an interest in a mirror and picture frame business; and a notary public". Below Chase's inscription is the following, "Bought of E. B. Chase in San Francisco, July 1866", with the penciled ownership inscriptions to front free endpapers of F. F. Percival and J. H. Willey; both of the latter being sea captains out of San Francisco: Percival was master for over ten years of the Blue Jacket, one of the fastest clippers of the day, Willey with the Ladoga in 1872.

The preface notes that "elaborate directions for the navigation of the Red Sea, by Captains Moresby and Elwon, of the Indian Navy, latterly published by the Honourable East India Company, have... been transferred to this work verbatim; and much additional information on the coast of Arabia, the Persian Gulf, the River Indus, and the Maldiva sic Islands, has been added... as well as several contributions to the hydrography of the West and North-west Coasts of Australia, and of Bass's Straits, by Captain Wickham, of HMS Beagle". Horbsurgh devotes pages 407-453 to the Gulf, including several references to locations in modern day Qatar: El Biddah (Doha); Ras Reccan (Ras Rakan), the northernmost point on the Qatari peninsular; Hawlool (Halul), one of the most important islands belonging to Qatar, lying some 80km northeast of Doha; Kore Hassan (Al Khuwayr); Roees (Al Ruwais); Booder-hoof (Abu Dhalou); Yoafee (Al Yousifiya); Fraeyah (Freiha); Zabara (Zubarah, "which has extensive ruins"); Ras Asheridge (Ras Ushayriq); Ras Luffan (Ras Laffan).

James Horsburgh (1762-1836) went to sea at 16 as an apprentice with a Fife company in the North Sea coal trade. He subsequently settled in India, obtaining work first as a rigger in the Calcutta shipyards, and then on locally-based merchant ships. In 1786 he was first mate on the Atlas in the Bay of Bengal "when, returning from Batavia and Bencoolen to Ceylon, the ship was wrecked on Diego Garcia. Fortunately the crew of the Atlas found there the ships of the Bombay expedition of 1786 sent to investigate the viability of establishing a settlement, and Horsburgh returned to Bombay in the Admiral Hughes after spending only three days on the island" (ODNB). It has been suggested that this incident was key in resolving Horsburgh to compile and collate as much accurate navigational information on the region as he could; "After his shipwreck on Diego Garcia, and particularly during his time as commander of the Anna, Horsburgh developed his interest in scientific observation and charting. As an interested commander of a country ship regularly crossing between India and China, Horsburgh was best placed to collect information and observations bearing on the navigation of the eastern seas, and to compile charts of and sailing directions for those waters Without extensive wealth to remit to Europe on retirement, Horsburgh planned to capitalize on his experience by publishing privately in London a series of charts of the China Sea, Malacca Strait, and Bombay Harbour Horsburgh's efforts between 1806 and 1811 were devoted to compiling comprehensive sailing directions for the East Indies navigation, the first edition of which appeared as Directions for Sailing to and from the East Indies He continued privately to revise and republish his sailing directions, subsequently known as the East India Directory, in editions of 1816-17, 1826-7, and 1836" (ibid.). Horsburgh subsequently became Hydrographer to the East India Company. In 1836, when news of his death reached Canton "a subscription was opened for a memorial to Horsburgh, which resulted in the construction of the Horsburgh lighthouse on the rock of Pedro Branca in the eastern entrance to the Strait of Singapore, for the safety of shipping arriving from China. An equally lasting memorial was the perpetuation of his East India Directory by the admiralty hydrographic office which produced the fifth, sixth, seventh, and eighth editions in 1841, 1852, 1855, and 1864" (ibid.).

Intended for use at sea, all editions of the Directory are uncommon; of this fifth, Library Hub cites only the copy at the National Maritime Museum among British and Irish institutional libraries; WorldCat adding below two dozen in international holdings. The size of Horsburgh's book and its status as an essential "bible" for mariners on the often treacherous run out to the South Seas means that those copies that do survive are more often than not found in rather compromised condition. The Nautical Magazine for 1874, reviewing the latest iteration of Horsburgh's Directory, was level-headed but heartfelt in its praise: "That the 'India Directory' through its eight editions, became a 'great book,' is an undoubted fact No other work embraces so great a scope as this one, and to enable the mariner to sail over one-half the seas, for which it is a guide, he must possess himself, if he has not this book, of books sufficiently numerous to form a small library. 'The East India Directory,' although a fair sized book, is multum in parvo, and the possession of it conduces to confidence in the mind of the mariner by the knowledge that all that is necessary is contained in the one book".