Skip to the beginning of the images gallery
[BACON, Mary Ann.]

A poem, with notes. Not published. 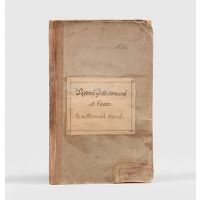 First edition, presentation copy, inscribed by the author on the half-title, "Mrs Howlett from her affectionate friend MAB". We can trace ten copies in institutions worldwide, just one of those a presentation copy, inscribed from the author's father (see below).
The little-known British poet Mary Ann Bacon (fl. 1839-1870, d. 1875) was born into a family of writers, editors, and publishers. Her father was Richard Mackenzie Bacon (1776-1844), the proprietor of the Whig Norwich Mercury, a leading provincial organ of liberal opinion. He was later joined in this venture by W. Kinnebrook and David Kinnebrook, and his son Richard Noverre Bacon (1798-1884) - hence the imprint of the present title. A contributor to a vast array of publications, particularly those with a focus on music, Richard Mackenzie Bacon "wrote most of the (usually unsigned) pieces, along with his daughters, Louisa and Mary Ann. The latter, like her father, also contributed to the New Monthly Magazine, he on music and she on French literature" (entry in the Dictionary of Nineteenth-Century Journalism in Great Britain and Ireland, p. 33). In later years the Mercury ran advertisements for his printing machine. Mary Ann's sister Louisa (1800-1885), later Louisa Barwell, became a highly-regarded musician and educational writer. Another sister, Jane, was a mezzo-soprano who studied in London and Paris.
On her death in 1875 the Norfolk Annals remembered that Mary Ann "possessed varied accomplishments and poetical talent. Early in life she assisted her father by translating and writing several valuable articles for the 'Musical Review'; and she was associated with Mr. Owen Jones in the production of some volumes of combined art and poetry which attracted much attention at the time of their appearance. Miss Bacon was particularly happy in her metrical translations of German, French, and Italian songs, and the books of the Norwich Festivals for many years attested her ready talent in giving the spirit of those languages when combined with music. She contributed many fugitive verses and serial tales in prose to the 'People's Journal' and other periodicals and magazines". She was also the author of several separately published works including Flowers and their Kind (1848), Fruits from the Garden (1850), and Winged Thoughts (1851).
The Legend of St. Bernard, a poem recounting the life of the 11th-century Italian monk Saint Bernard of Menthon, has often been wrongly attributed or its author simply left anonymous. WorldCat and Library Hub trace ten copies. The four in the UK list no author: British Library, Oxford, National Trust Libraries (at Sherringham, Norfolk), and National Library of Scotland. The other six are located in North America: the Library of Congress lists no author, Cornell identifies the writer as Thomas Noon Talfourd (1795-1854), and the UCLA, University of California, and UC Davis Libraries (Shields Library) copies are catalogued under "M. A. Bacon", identified as Mary Ann, with the note "Author from Bibliotheca Norfolciensis". The final copy, at Stanford, is firmly attributed to Mary Ann, being inscribed thus: "Presented to J.S. Muskete? Esq. as a slight token of long continued respect by the father of the authoress, R.M. Bacon, illegible Feb 24 1842". Cambridge University Library has a single-volume collection of her verses and translations in manuscript, the works within variously dated between 1839 and 1870.
The recipient of the present copy remains largely anonymous, though the genealogy of the Bacon family suggests that they and the Howlett family may later have become linked through marriage. One record notes the marriage of a James Taylor of Hindolveston, Norfolk (a short distance north-west of Norwich) to a Mary Ann Bacon (b. 1823). Their son, Thomas Bacon-Taylor married Frances Howlett Yaxham. The Mrs Howlett to whom this was gifted may have been an earlier relation.

Ownership signature of A. Leigh Hunt to title page, his initials to front wrapper; in 1870 Hunt published a history of the town of Thetford in Norwich. A well-preserved copy of a fragile provincial publication, the contents clean and crisp; early paper repair filling in loss at bottom right corner of front wrapper, some chipping and creasing to extremities and some leaves.