Skip to the beginning of the images gallery
HANGER, George, fourth Baron Coleraine. 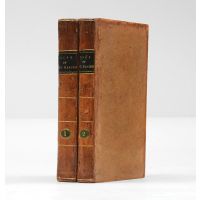 First edition. Extraordinary autobiography of this "irascible, violent, dissipated, extravagant, and individualistic" character. Educated at Reading School, Eton College, and the University of Göttingen, Hanger entered the army as ensign 1st Foot Guards in 1771 (ODNB). He "retired" in 1776 in a snit having been passed over for promotion, but later joined a regiment of Hessian Jägers and sailed with them to North America. In 1780, he was appointed aide-de-camp to the commander-in-chief, Sir Henry Clinton; but on Clinton's return to New York Hanger remained in North Carolina to assist Major Patrick Fergusson organise the loyalist militia there. "This soon proved uncongenial and he transferred to Banastre Tarleton's British Legion, as commander of its light dragoons with the provincial rank of major, and became Tarleton's lasting friend." On his return to London; "A beau and clubmanin both senseswho affected the manners of the French court, Hanger assisted Tarleton with his faro bank at Daubigney's Tavern, London, lounging at the entrance with a huge rattan he called 'the Infant'. He became one of the dissipated companions of the prince of Wales, indulging in gambling, racing, and pugilism His critics considered him among the dregs of society. He was much mentioned in contemporary memoirs and was caricatured by Gillray, Rowlandson, Dighton, and Cruikshank." He lived an increasingly rackety existence, drawing full-pay on "retirement" as captain commissary of the corps of Royal Artillery drivers "blatant jobbery", but unable to avoid periods in the King's Bench prison for debt. He died in 1824 of a "convulsive fit". This copy with the Stratton Street library bookplate with ducal coronet of Harriot, Duchess of St. Albans to the front pastedown - formerly the "darling of the frivolous London stage"; mistress then wife of Thomas Coutts, one of the wealthiest men in Britain; Harriot became a successful businesswoman in her own right before her marriage to the ninth Duke of St. Albans. An appealing association of two notable, and slightly eccentric, Regency lives.

Half-titles bound in, wood-cut of a hanged man to the text.

Somewhat rubbed at the extremities, some judicious restoration to the spines and joints, tan-burn to the endpapers, front free of volume II becoming brittle at the margins, text a little browned, but overall very good.