Skip to the beginning of the images gallery
CLARKE, James Stanier, & John McArthur. 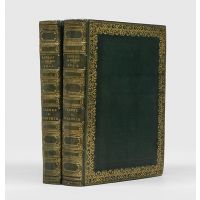 The Life and Services of Horatio, Viscount Nelson, from His Lordship's Manuscripts.

First edition of "one of the main foundation stones of the Nelson legend" (Cannadine, p. 99); Lowndes notes that "1200 copies were subscribed for", this a handsome copy with an appealing maritime provenance. Clarke and McArthur's book is fittingly handsome, being printed by Thomas Bensley, one of the best printers of the day, on superior quality paper.

John McArthur, a former naval purser, had served with Nelson in the Mediterranean and had already begun collecting material for a biography when he saw "an advertisement in the papers announcing that the Nelson family had selected a gentleman 'of high respectability and rank' to write the life, and asking all who had letters in their possession not to make their material available to anyone else." McArthur came forward, claiming, groundlessly, that Nelson himself had asked him to write his life, and that he had already incurred considerable expense in preparing the book, including the commissioning of a set of paintings to be engraved as illustrations. An unseemly squabble ensued, the outcome of which was fairly inevitable in that Earl Nelson was under pressure from the Prince Regent to commission his librarian and chaplain, James Stanier Clarke, to write the book. It was agreed that the authors would pool their efforts, but not before they had further fallen out over whose name should come first on the title page. That we do not refer to McArthur & Clarke is a lasting memorial to the usefulness of a powerful patron. The finished work is wonderfully illustrated with anecdotal headpieces and plates by Westall and battle-scenes by Nicholas Pocock. The subscribers list is a remarkable directory of the great and the good of Regency Britain with an inevitable emphasis on naval notables. William Beckford took the only copy on vellum, Sir Home Popham and Admiral Keats proof copies, as also Admirals Cornwallis and Anson, Earl St Vincent and Lady Hamilton. Thomas Masterman Hardy had an ordinary copy, as did the Sandwich Book Society and Leeds Circulating Library. Roger Knight, Nelson's highly-acclaimed biographer, notes that "Clarke and McArthur were responsible for creating more myths about Nelson than any other authors".

Frontispiece and 3 other plates to volume I, 7 plates to volume II, 4 of them accompanied by plans, headpieces, vignettes and facsimiles to the text, double page pedigree to volume I. Armorial bookplates of Anthony Cliffe of Bellevue, Co. Wexford to the f

A little rubbed at the extremities, a couple of minor scuffs to the boards, frontispiece slightly damped in the tail margin, light toning, a very good copy.

The Life and Services of Horatio, Viscount Nelson, from His Lordship's Manuscripts.