Skip to the beginning of the images gallery
(VICTORIA, Queen.) MARTIN, Theodore.

With portraits and views. 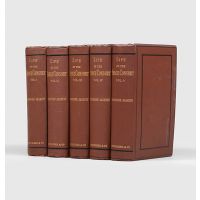 Presentation copies from Queen Victoria, inscribed on the front free endpaper of three volumes: vol. I, "To John Longden from Victoria RI Windsor Castle Dec. 24. 1877"; vol. IV, "To John Longden from VRI Victoria Regina et Imperatrix July 31. 1879"; vol. V, "To John Longden Esq from VRI June 1880". A most attractive association: the recipient, John Longden, was one of the longest serving members of the queen's household, apparently originally entering royal service in 1838; he may have been the son of a J. Longden who is listed as a Yeoman of the Coalyard in 1829. The Royal Kalendar between 1838 and 1853 lists him as one of three groom porters, promoted to First Groom Porter (1854), Yeoman Porter (1855); by 1874 he had risen to the rank of First Gentleman Porter and in 1878, as "J. Longden, Esq.", is listed as one of two clerks. In 1865 Victoria presented him with a Prince Albert stickpin (auctioned by Dix Noonan Webb, 27 March, 2018). The set is of mixed editions: vols. I and IV, fourth; vols. II and V, third; vol. III, first; each volume was quickly reprinted and "was generally well received, to the queen's delight" (ODNB).

This extensive biography of Prince Albert (1819-1861) was begun in 1866 and originally intended to be a continuation of The Early Years of His Royal Highness the Prince Consort (1867) by Victoria's private secretary Charles Grey. The queen interviewed Martin on 14 November 1866 and, finding him "very pleasing, clever, quiet, and sympathique", engaged him to write the biography, Victoria selecting the documents for use and intervening widely in the manuscript. "Martin's Life is a goldmine of letters and papers and is less adulatory in tone than might be expected; its relative under-use by historians is a comment less on its content than on the absence of an index. A digest of it was published as Martin's memoir of the prince consort in the Dictionary of National Biography" (ibid.).

Engraved portrait frontispieces to each volume, 8 other plates of portraits and views with tissue-guards; one a folding facsimile of a draft memorandum by Prince Albert to Lord Lyons in 1861.

Light rubbing at extremities, a few small chips and patches of minor wear to cloth, light white marking to fore edges of boards, splits to rear hinge of vol. IV and front hinge of vol. V. A very good set.