Skip to the beginning of the images gallery
DE QUINCEY, Thomas. 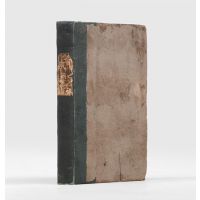 Confessions of an English Opium-Eater.

First edition. The Logic of Political Economy, De Quincey's exposition of Ricardian economics, is the author's principal economic work. Rearranged from a series of papers by his publisher and discussing the relative influence of utility and scarcity, the former being described as affirmative or power value, the latter as negative or resistance value, De Quincey's essay received a glowing review from John Stuart Mill.

Presentation copy to the author's friend Edmund Lushington (1811-1893), inscribed at the head of the title page, "Ed Lushington From the Author", the first part of the inscription being most probably in the recipient's hand and the second part in a Blackwood's clerk's. De Quincey was first introduced to Lushington in 1840 by political economist John Pringle Nichol and a friendship quickly developed, lasting until De Quincey's death in 1859. Lushington, professor of Greek at Glasgow, had been one of the "Apostles" at Trinity College, Cambridge, along with Tennyson, for whom he translated into Greek "Oenone" and "Crossing the Bar" and whose sister Cecilia he later married. This marriage was commemorated by Tennyson in the Epilogue of "In Memoriam". For a few years in the early 1840s Lushington provided De Quincey, perpetually running away from debts, with a home at his university lodgings and practical support with his writing. "Procrastination, De Quincey confessed to Lushington, remained amongst his 'infirmities', but Lushington's classical expertise, together with his willingness to borrow books from the university library, enabled De Quincey to produce a string of Blackwood's essays on Greek literature, beginning with 'Plato's Republic' and followed shortly thereafter by a three-part examination of 'Homer and the Homeriade'" (Morrison). Less than a month before De Quincey's death, "Lushington told Emily Tennyson that he had seen 'poor De Quincey', who was 'somewhat seriously ill with a sort of delirious fever: his daughter told me he was now better, but one cannot quite be sure how much the better means - he was taking rather more opium than the Dr seemed to approve'" (ibid.) Laid in is a contemporary manuscript transcript from memory of parts of Tennyson's "In Memoriam", Section XCIX, "Risest thou thus, dim dawn, again" and "Immortality", totalling seven stanzas on two sides of a folded sheet.

Confessions of an English Opium-Eater.