Skip to the beginning of the images gallery
BELT, Thomas.

A Narrative of a Residence of the Gold Mines of Chontales; Journeys in the Savannah and Forests. With Observations on Animals and Plants in Reference to the Theory of Evolution of Living Forms. With Map and Illustrations. 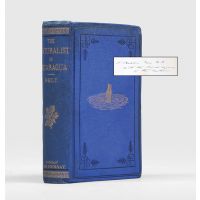 First edition. Presentation copy, inscribed verso of the front free endpaper, "P. Brown Esqre, M.D. with the kind regards of the Author", with Brown's ownership inscription to the title page. The son of a Newcastle seedsman, Belt (1832-1878) was educated at a private school conducted by by John Storey, a secretary of Tyneside Naturalists' Field Club, becoming an enthusiastic student of natural history. "In 1852 he left England for the Australian gold-diggings, and, with three brothers, worked as a miner. Between 1853 and 1860 he visited several mining districts and pursued his geological investigations. He became a member of the Philosophical Institute of Victoria In 1862 Belt returned to England with a high reputation and established himself in London as a consultant mining engineer. He was a fellow of the Geological Society and a corresponding member of the Philadelphia Academy of Natural Sciences". Around 1863 he travelled to Canada as superintendent of the Nova Scotian Gold Company's mines, and from 1868 to 1872 "he conducted the mining operations of the Chontales Gold Mining Company in Nicaragua. His observations of that country's geology, flora, and fauna" are described in the present work. During the 1870s he spent time in Siberia and on the Russian steppe, from his observations developing theories which led him to deal "boldly and suggestively with the phenomena of the Glacial period in Britain and in various parts of the world" (Ency. Brit., 1911).

Belt initiated a correspondence with Darwin about the symbiotic relationship between the "Bull's Horn Acacia" - Acacia collinsii- and the ant Pseudomyrmex spinicola, which lived off the plant's secretions while defending it from aggressive parasites, later discussing Belt's theories on glaciation and extinction. Darwin received a copy of Belt's book on publication, and wrote to Hooker: "Belt I have read, and am delighted that you like it so much, it appears to me the best of all natural history journals that have been published" (quoted in The Life and Letters of Charles Darwin, vol. II, p. 169). An uncommon work, particularly so inscribed.

Octavo. Original blue sand-grain cloth, title gilt to the spine together with a fern device, decorative panelling to both boards in black, alligator vignette centre-tool to the front, dun surface-paper endpapers.

Wood-engraved frontispiece and 2 other similar plates, 23 illustrations to text, 2 of them full-page, folding map at rear, blue colour wash outline.

A little rubbed, slight cast to the spine, corners softened, some light restoration to the spine and top edges of the boards, both hinges neatly repaired, text-block toned, a touch of foxing front and back, but overall very good.