Skip to the beginning of the images gallery
CUMBERLAND, Richard. 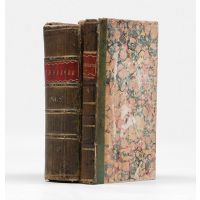 First edition of the first four volumes of Cumberland's Observer, comprising 125 essays. A fifth volume with a further 27 essays followed in 1790. "Although Cumberland will largely be remembered as a playwright, he was more than merely a man of letters. His novel Arundel (1789), written in epistolary form, begs comparison with Samuel Richardson's Sir Charles Grandison. Henry (1795) is an attempt to emulate Henry Fielding, while John de Lancaster (1809), published two years before Cumberland's death, is best left undescribed. Among Cumberland's more notable prose works is the Anecdotes of Eminent Painters in Spain during the Sixteenth and Seventeenth Centuries, a product of a visit to Spain. When George Germaine (later Lord Sackville) became colonial secretary at the end of 1775, he made Cumberland secretary to the Board of Trade. Five years later Cumberland was sent to Spain to enter into secret negotiations with the intent to procure a separate treaty with England. After a stay of several months he returned to England without the desired results and discovered that he had spent some 4500 which was never repaid. With the abolition of the Board of Trade soon after his return, and with but half his salary as compensation, he retired to Tunbridge Wells where he remained until his death. His next prose work was in a more familiar genre, a periodical paper called The Observer which appeared in five volumes between 1786 and 1790 and contains 152 essays. The essays range from the usual fare of literary criticism (on Shakespeare, Ben Jonson, Milton, Rowe, and others), to general subjects ('Love of praise'), little tales (often running to three or more numbers), historical essays, and a variety of other sub-genres. Of special interest is no. 27, 'Remarks upon novels; particularly of Richardson's Clarissa', in which he also invokes Fielding. Unlike other periodical papers, there are thirty-eight consecutive essays (nos. 114-52) on Greek history and literature, with a number of his translations of Greek poetry." (ODNB).