Skip to the beginning of the images gallery
VERNEUIL, Adélaïde & Maurice Pillard.

Together with a set of the published pochoir plates. 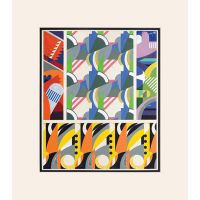 The original, highly finished artwork for the complete suite of pochoirs for the Verneuils' Kaléidoscope, "a masterwork of Art Deco design" (V & A website "The Kaleidoscopic Wonder of Art Deco Prints"). A visually spectacular document of what is widely recognised as one of the most brilliant of the art deco pattern books - a genre which Ray considered displayed art deco "in its purest form" (The Art Deco Book in France, p. 28) - a group remarkable for its artistry and almost equally for having survived close to a century complete. We have been unable to find records for any comparable archives on the market.

The 20 sheets of Kaléidoscope contain 87 textile designs composed of "colourful, abstract motifs, which evoke, with their fragmented vocabulary, the dynamism of modern culture" (The Met web site) which were to exert a strong influence on the spread of art deco, becoming something of a toy box for designers for decades to come. Maurice Verneuil (1869-1942) began his artistic education in 1888, enrolling in the architectural section at the École nationale supérieure des beaux-arts in Paris. However, he was beguiled by the growing interest in ornament, and in 1892 joined the École Guérin where he fell under the influence of Eugène Grasset, one of the pioneers of art nouveau. Subsequently Verneuil became a skilful, mostly self-taught practitioner in a wide range of artistic disciplines - posters, furniture, marquetry, enamel, ceramics, batik, embroidery, photography and painting - and a leading theoretician of modern design in France, contributing illustrations and articles to Grasset's Art & Decoration and Albert Quantin's Le Monde moderne. In 1925 he was responsible for the publication of Étoffes et Tapis Étrangers, an illustrated study of the textiles exhibited at the Exposition Internationale des Arts Décoratifs et Industriels Moderne, one of the key publications of the exhibition that gave birth to the art deco movement.

The work is credited on the title page to Maurice and "Ad. Verneuil", and it has been suggested that this refers to Adam, Maurice's brother. However his collaborator on this key project was in fact his wife Adélaïde, an attribution finally confirmed by Maurice's biographer Helen Bieri (Bieri, p.118). Adélaïde Verneuil de Marval (1898-1998), a Swiss artist, illustrator, bookbinder, and art critic, married Maurice in 1921, having been fascinated by his theories of design. By way of a honeymoon they made an extensive tour of Asia, bringing back a collection of prints and artefacts which was to influence their work thereafter, and from which Adélaïde donated a number of pieces to the Musée ethnographique de Genève. She is probably best known in her own right as a book illustrator, with a speciality in books on Buddhist themes.

Much has been made of the fruitful convergence of the art deco period and the flowering of the pochoir technique, praised by Ray for its "subtle gradation" of colours, and promoted by Jean Saudé, acknowledged master of what he termed "enluminure", and author of the authoritative manual Traité d'enluminure d'art au pochoir (1925), as "the only process which from the first to the last, best interprets the artist's original style" (Ray, p. 48). Inevitably, Saudé was responsible for the plates of Kaléidoscope, and the quality of his work is peerless. But these original drafts reveal something of the process behind the creation of the Verneuils' innovative designs; pencil annotations show that the plate order was changed for publication, at least two of the plates were printed inverted according to the original markings, and entire sections of two plates have been excised and neatly replaced with a new pattern. Overall the palette of the pochoirs shifts towards lighter, cooler tones, the colours of the gouaches are denser, more intense, and inevitably the line is tougher and more vigourous, the surface actively worked; these originals possess great presence.

A perhaps unique opportunity to own the original artwork for one of the true masterpieces of the art deco era.

20 original designs, gouache over pencil on heavy paper stock (c. 440 x 345 mm), pencilled editorial annotations and alterations to the margins, two plates with carefully excised sections replaced with corrected designs, loosely corner mounted into recent window mounts for handling and display; with the published suite, title-page and 20 pochoir plates executed by Jean Saudé, many - as in the originals - utilising metallics, without the original chemise. The two housed in a custom ivory silk moiré solander case, illustration from the front panel of the original binding mounted on the lid.

Paper lightly browned, a little more so at the margins, light soiling and few paint smudges, most sheets with some pinholes, occasional minimal chipping to the corners; the some paint surfaces with mild flaking, otherwise in very good, unrestored condition.