Skip to the beginning of the images gallery
JODRELL, Richard Paul. 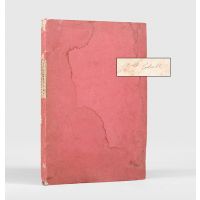 First edition thus, second overall, signed by the author on the front free endpaper. Originally published in 1786 in octavo, this edition presents the play in three acts instead of the previous five "to allow a representation of it in either of those two modes" (preface). Well represented institutionally but commercially uncommon; signed copies are rare.

Richard Paul Jodrell (1745-1831), classical scholar and playwright, educated at Eton and Hertford College, Oxford, trained for the bar but, on inheriting his father's estates at Lewknor, in Oxfordshire, and marrying well, pursued a literary career. "He failed to persuade the managers of Drury Lane and Covent Garden to perform his tragedy The Persian Heroine, based on Herodotus, but, once printed, it went to several editions and was translated into Italian" (ODNB). In the Persian Heroine, Jodrell "tries to illustrate the customs and manners of the Ancient Persians. The play was produced under the patronage of the Persian ambassador Mirza Abul Hasan Khan Ilchi in 1819, who was in London at this time" (Javadi, p. 3). Among Jodrell's published works were a collection of farces and comedies, a poetical collection and a treatise entitled Philology of the English Language (1820). He was a friend of Samuel Johnson and a member of the Essex Head Club and is mentioned in passing in Boswell's Life, where he is noted as the last surviving member of the club (Croker ed., 1831, V, p. 170). His sensitive portrait by Gainsborough is in the Frick Collection.

Provenance: bookplate of R. C. Fiske, North Walsham, Norfolk, "an inaugural member of the Nelson Society and its chairman for nine years. He helped form the North Walsham and District Historical Society, Cromer Museum and the Norfolk Nelson Museum in Great Yarmouth. He was also an expert on heraldry and was made a fellow of the National Heraldry Society" (northnorfolknews.co.uk, retrieved 16 December 2019).

Water stains to binding, and marginally to first and last few leaves, endpapers lightly foxed, pages a little crinkled, else a very good, wide-margined, and firm copy without ownership inscriptions.