Skip to the beginning of the images gallery
ALLEN, Mary S. 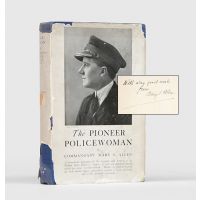 First edition, first impression. Presentation copy, inscribed by the author on the front free endpaper, "with every good wish, from Mary S. Allen", with an autograph note loosely inserted, "Hoping you will accept this - If in your part of the world I will certainly let you know. M. S. Allen". The Pioneer Policewoman was Mary Sophia Allen's (18781964) first published work and details her role as commandant of the Women's Auxiliary Service from 1920 onwards. The work is dedicated to her predecessor in the role, and sometime lover, Margaret Damer Dawson. The Women's Auxiliary Service was founded by Dawson in 1914 as the Women Police Volunteers, before becoming the Women's Police Service in 1915, and the Women's Auxiliary Service in 1920. The Women Police Volunteers was an independent organisation whose members were trained, uniformed, and prepared to work full time, and was fully funded by subscription and private donation. Allen joined the WPV in the role of Constable in Grantham, Lincolnshire, in November 1914. Allen's "zeal in discouraging companionship between local women and soldiers at the Grantham camp, so as to prevent prostitution, led to a split in the Women Police Volunteers and the resignation of Nina Boyle, one of its founders. Allen replaced Boyle as sub-commandant in February 1915. In May 1915 she was transferred to Hull, where she and her colleagues maintained order through several Zeppelin raids. After a period of service in Hull she returned to London to assist in the training of policewomen for munitions factories all over the country. She was appointed OBE in February 1918 for her services during the war". Prior to her role in the WVP Allen was an active suffragette and served three prison terms in 1909 for her militant activities. Whilst imprisoned she took part in a number of hunger strikes and was repeatedly force fed. She first "envisaged the idea of women police, to arrest women offenders, attend them at police stations, and escort them to prison and give them proper care" whilst serving these terms (ODNB). Following a subsequent period of illness Allen was forbidden by Emmeline Pankhurst from participating in any further militant activities and was the first woman to be awarded a hunger strike medal from Mrs Pethick-Lawrence in August of that year. Subsequent to the release of this work Allen travelled extensively on lecture tours and inspected the training methods and administration of women police forces in many countries, including Egypt, Brazil, and Finland.

A woman of contradictions, Allen aroused controversy in the 1930s by speaking in praise of the British Union of Fascists; nevertheless, she remains a pioneering figure in the introduction of women into the British police force (Crawford).

A little fading to spine, rubbing to extremities, touch of wear to tips, faint foxing to endpapers, tiny mark to head of plates; a very good copy in the scarce, soiled, jacket with loss to spine ends and tips, sticker residue to spine, nicks and scuffs to edges and folds, small puncture to rear cover.