Skip to the beginning of the images gallery
CARTWRIGHT, John.

Wherein is set downe a true Journall to the confines of the East Indies, through the great countreyes of Syria, Mesopotamia, Armenia, Media, Hircania and Parthia. With the Authors returne by the way of Persia Susiana, Assiria, Chaldaea, and Arabia … Also a true relation of Sir Anthonie Sherleys Entertainment there … 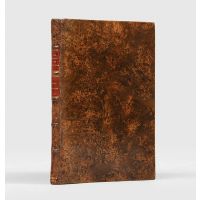 First edition. John Cartwright, identified on the title page as "sometimes student in Magdalen Colledge in Oxford", is invariably referred to as "The Preacher" after the title of this book; his name is often listed as being employed by the Levant Company in that capacity. Yet one of the oddest features of his fascinating travel tale is that Cartwright never once makes mention of preaching, either in any of the places to which he went or to any congregations. In fact he may well have been travelling solely to satisfy his desire for sight-seeing. If so, Cartwright's travels offers evidence that the notion of travel simply out of personal interest, not tied to either commerce or diplomacy (or earlier, to pilgrimage), had been in occasional existence some time before it was firmly established in the 18th century.
Cartwright probably left England in April 1600, and travelled to Aleppo via Sicily, Zante (Xakinthos) and Crete. At Aleppo, where he was welcomed by the consul, Richard Colthurst, he met John Mildenhall, then in the employ of Richard Staper, a member of the newly formed English East India Company, who was in Aleppo, on his way there. Having stayed in Aleppo for some two months, the two Englishmen travelled together for part of the way, members of a caravan of some 1,000 people. "After separating from Mildenhall, Cartwright proceeded to Esfahan and continued to travel widely in the Middle East" (Howgego). The text also includes a brief account of the experiences of Anthony Sherley, the famous English adventurer whose own account of Persia was not published until 1613. Cartwright appears to be the first Englishman to have been to all four key sites of antiquity in the Near East: Babylon, Nineveh, Persepolis, and Susa.