Skip to the beginning of the images gallery
HAKLUYT, Richard, & Samuel Purchas.

Made by Sea or Over-land to the Remote and Farthest Distant Quarters of the Earth at any time within the compasse of these 1600 Yeeres. 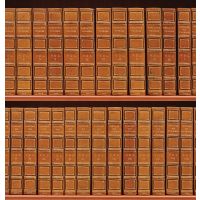 A particularly nice example of the "the best modern edition" of Hakluyt in 12 volumes, together with Purchas's continuation in 20 volumes, handsomely bound in the publisher's original binding. First published in 1589, the text in this edition of Hakluyt's Voyages was derived from that of the 1598-1600 edition as revised by Hakluyt, and includes Sir Walter Raleigh's Essay on the Life of Hakluyt and a full index in the final volume.
Hakluyt took such patriotic pride in his countrymen's exploits in the fields of travel and adventure that he devoted his life to preserving the records of all English voyages. Voyages was the greatest assemblage of travel accounts to all parts of the world collected up to its time, and a primary source for early New World exploration. Hakluyt's second collection greatly enlarges the first, one-volume edition of 1589, with the entire third volume dedicated to America. It is a massive collection of voyages, many printed for the first time, ranging from the fourth century to the recent exploits of Elizabethan seamen such as Drake and Cavendish. "Hakluyt was a vigorous propagandist and empire builder; his purpose was to further British expansion overseas. He saw Britain's greatest opportunity in the colonisation of America, which he advocated chiefly for economic reasons, but also to spread Protestantism, and to oust Spain" (Hill).
At Hakluyt's death his manuscripts fell into the hands of Purchas, who revised and added to the collection, publishing his work in 1625. It was not reprinted until the publication of this edition. Purchas followed the general plan of Hakluyt, but frequently put the accounts into his own words.
From the library of Dr Andrew Maitland Ramsay (1859-1946), an eminent Scottish eye surgeon, medical author, and former President of the Ophthalmological Society of the United Kingdom; subsequently presented to Morrison's Academy Library, Crieff, with their stamps and bookplates, by Dr Ramsay's widow, Dr Elizabeth Pace (1866-1957), a Scottish doctor, suffragist and advocate for women's health and rights.