Skip to the beginning of the images gallery
GIBRAN, Kahlil. 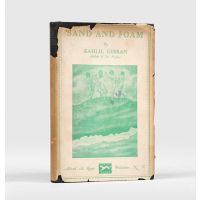 Sand and Foam: A Book of Aphorisms. 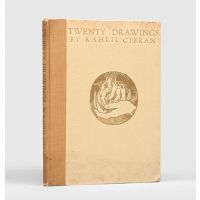 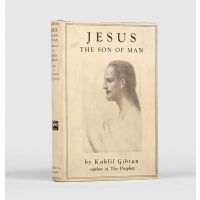 Jesus The Son of a Man.

First edition, first printing, a very scarce presentation copy inscribed on the front free endpaper "To Brander Matthews with real admiration from Kahlil Gibran, October 1923". The recipient, Brander Matthews (1852-1929), was an American writer and educator. The first full-time professor of dramatic literature at an American university, he played a significant role in establishing theater as a subject worthy of formal study in the academic world. His interests ranged from Shakespeare, Molière, and Ibsen to French boulevard comedies, folk theater, and the new realism of his own day. A socialite, his friends included Robert Louis Stevenson, Rudyard Kipling, Mark Twain, and Theodore Roosevelt. "Matthews served as president of the Modern Language Association (1910) and of the National Institute of Arts and Letters (1913), as well as chancellor of the American Academy of Arts and Letters (19221924)" (ANB).
Kahlil Gibran (1883-1931) is one of a select group of literary geniuses whose greatest works were written in a language other than that of their birth. Born in the Lebanon, Gibran emigrated to the US and having published several works in Arabic he produced The Prophet, his masterpiece, in English. It was this collection of inspirational essays, first printed in September 1923, that established his world-wide reputation. Never out of print, translated into over 40 languages, and with sales of over 100 million copies, The Prophet is responsible for Gibran's ranking as the third best-selling poet of all time, behind Shakespeare and Lao-Tzu.
Signed or inscribed copies of the first printing of The Prophet are very scarce indeed; we can trace only two others, one of which merely signed.

Frontispiece and 11 other plates after drawings by Gibran.

Sand and Foam: A Book of Aphorisms.

Jesus The Son of a Man.