Skip to the beginning of the images gallery
BECKE, A. F. 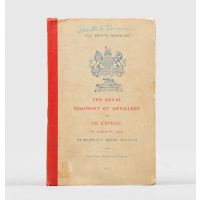 First edition, first impression, 2nd Corps commander Sir Horace Smith-Dorrien's copy, with his ownership inscription in blue pencil to the front board and his annotations to some 20 pages, of this extremely detailed stage-by-stage account of the first major action of the British Expedition Force (BEF) in the First World War, the action on which Smith-Dorrien's military reputation rests.
On the sudden death of Sir James Grierson, Smith-Dorrien had been given command of 2nd Corps by Kitchener, despite the BEF commander Sir John French's clear preference for Lieutenant-General Sir Herbert Plumer and French's running feud with Smith-Dorrien. For his part Smith-Dorrien "stepped voluntarily into the confrontation Smith-Dorrien took over II Corps on 20 August 1914, and three days later the BEF was heavily engaged in the battle of Mons, followed by a retreat closely pursued by considerably superior German forces." Advised by Allenby, commanding the cavalry division, that his cavalry were too dispersed to cover the 2nd Corps retreat, Smith-Dorrien decided to stand and fight, in technical defiance of French's order to continue the retreat. Smith-Dorrien's decision was supported by others, including Allenby, and permission to fight was received from French shortly before dawn. However, French let 1st Corps continue its retreat, leaving Smith-Dorrien to fight the battle of Le Cateau without support.
"The resulting battle was a demonstration of one of the most difficult of all military manoeuvres, a delaying operation and retreat from contact. Smith-Dorrien's troops, with both their flanks in the air, fought a German attack of about twice their own strength to a standstill, and then marched away in broad daylight. Casualties for the battle were heavy but it enabled 2nd Corps to break contact, and the Germans did not locate the BEF again until 1 September. The destruction of half the BEF had Smith-Dorrien mishandled 2nd corps at Le Cateau would have had incalculable results, and his military reputation has come to rest heavily on this small but important battle" (ibid.)
French subsequently dismissed Smith-Dorrien in favour of Plumer, his original choice for the command. A combination of military-political machinations and ill-health meant that this command was Smith-Dorrien's last active service role.
In 1919 French's war memoirs began to be published in instalments, containing an account of Le Cateau and Smith-Dorrien's conduct "so inaccurate as to verge on the defamatory, as well as contradicting the version in French's own official dispatches" (ibid.) Smith-Dorrien's request for a Royal Commission to examine the matter was refused and he had to satisfy himself with stating his version of events in a privately-circulated memoir.
However, in 1922, the first volume of the official history of the First World War vindicated his position. "Although largely forced upon him, Smith-Dorrien's dignified public silence won him much sympathy and credence for his own memoirs which appeared in 1925 after French's death" (ibid.)
The present work was compiled by a notable military historian and gunner officer who was attached to the Historical Section (Military Branch) of the Committee of Imperial Defence, who therefore had privileged access to the relevant War Diaries, and in addition, interviewed "every available artillery officer" (Falls) who was present.
Issued in the midst of the controversy, when the prevailing view was that the British had been overwhelmed at Le Cateau, Becke offers a stout rebuttal: "No statement could be more inaccurate. The more closely it is studied the more certain it becomes that the Action fought by General Sir H. Smith-Dorrien and the troops under his command on August 26th, 1914, was not only a triumph for the British arms but had a most important bearing on the whole retreat. Indeed it is not too much to claim that future historians will pronounce Le Cateau to be one of the most important delaying actions recorded in history."
From the "other side of the hill" von Kluck declared, "The way the retreat was carried out was remarkable. I tried very hard to outflank them, but I could not do so. If I had succeeded the war would have been won" (quoted in Smith-Dorrien, Memories of Forty-Eight Years' Service).

5 folding maps and 4 folding sketches in an end-pocket.