Skip to the beginning of the images gallery
HARDY, Thomas.

The Works. In Prose and Verse with Preface and Notes. 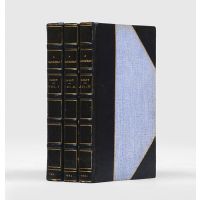 First edition in book form of one of Hardy's lesser-known novels. Written during the year 1879 and serialised in the magazine Good Words (where it was bowdlerized by its Scottish clergyman editor), it is a tale in which Hardy compiled the three separate strands which at that time most affected his life. One strand was his own Dorset background, and in particular the idea of a family reminiscence; another is the strand of historical study, and in particular the concentration he was then giving to the years 1804-1805 and the effect of the then recent French Revolution. "These two strands... are firmly woven into the construction of the novel, and give it remarkable unity and a steady sense of reality. Hardy was determined that the charges of unreality, brought against 'The Return of the Native', should not be repeated" (Gittings). The third strand, natural in that Hardy was then writing with an idea of how his books might appear onstage, is that the characters are "universal figures from the traditional rituals of the theatre". "It was an inspired time to begin dramatic work. Ellen Terry had joined Henry Irving as his leading lady in 1878... Hardy's concentration in 1879 on theatrical matters held a great importance for the novel he was writing... The pattern of the book, embracing nearly every major character, derives from the old Italian Comedy of Masks, whose debased form, the harlequinade, was showing in nearly every Victorian theatre, burlesque and ballet" (ibid). In any event, The Trumpet-Major was a triumphant success with the critics; however, in spite of Hardy himself drawing the two vignettes for the volumes' front covers, the novel in book form did not sell well.
On this copy the blank rear covers have a blind-stamped three-rule border; other copies are identical except for a two-rule border. Of the 1,000 copies printed, 600 were issued with the two-rule border (almost entirely to lending libraries), 1,500 were issued with the three-rule border a month or two later, and the remaining 20 unbound quires were remaindered two years later. Since the three-decker format was intended to be rented rather than bought by the public (the vast majority of first edition copies always went directly to lending libraries), it is increasingly difficult to find Hardy's pre-1890 novels in condition approaching this.

The Works. In Prose and Verse with Preface and Notes.