Skip to the beginning of the images gallery
DANTE ALIGHIERI.

Translated by the Rev. Henry Francis Cary. In three volumes. The second edition corrected. With the life of Dante, additional notes, and an index. 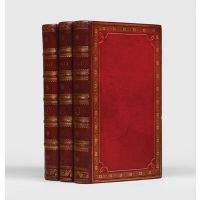 Second and best edition of one of the most important translations of Dante of the Romantic era, following the very scarce first edition which appeared in 1814 in such a diminutive format that it was barely legible. When found, copies of this larger format edition are more usually seen rebound or with repair - this example survives unmolested in attractive contemporary calf, preserving the half-titles, blanks, and publisher's advertisements (listing, incidentally, Keats's Endymion, and the debut collection of John Clare, styled "a Lincolnshire peasant" and the book titled "Poems, Chiefly Pastoral" where it would instead be published in 1820 as "Poems, Chiefly Rural").
"In January 1797 Cary began his translation of Dante's Divina commedia into blank verse. He started with the Purgatorio in 1797-8, but in 1800 he turned his attention to the Inferno, and it was this part which was published first, in 1805-6, accompanied by the Italian text. Sales were small, but Cary continued, and his translation of the complete Divine Comedy was completed in 1812 Cary was not adept at self-promotion, and his translation initially attracted little attention Then in October 1817 he made the acquaintance by chance of Coleridge at Littlehampton, and the praise which Coleridge gave to Cary's Dante in a lecture early in 1818 (reinforced by a favourable article by Ugo Foscolo in the Edinburgh Review) led to the sale of 1,000 copies of the collected edition in less than three months, and the publication of a second edition in 1819... This work is his chief claim to fame, and it remained a standard text well into the twentieth century, despite the fact that the number of translators of the work between 1782 and 1966 amounted to eighty-four. Cary's version was admired by Wordsworth, Keats, Lamb, Coleridge, Macaulay, and Ruskin, and in 1966 the author of a work on translations of the Divina commedia wrote 'Cary's version still holds its place as a minor classic, thanks to the fact that its author was a competent versifier with some poetic perception' G. F. Cunningham, The 'Divine comedy' in English: a critical bibliography, 2 vols. (1965-6)" (ODNB).

Bound with half-titles and blanks in each volume, and 6 pp. publisher's advertisements at the rear of vol. 3.

Armorial bookplates of Francis Broderip and Chichester Samuel Parkinson-Fortescue, Lord Carlingford (1823-1898, Liberal politician). Light wear to ends and corners, headcap of vol. 1 a little chipped, two small abrasions to lower title label of vols. 1 and 3 and somewhat larger to vol. 2, ink mark to centre of vol. 1 front board, some other minor scuffs and marks, joints entirely sound, only slight crack starting from head of vol. 1 rear joint, clean within, a very good copy.