Skip to the beginning of the images gallery
JONSON, Ben.

London: printed by Richard Bishop [and Robert Young], and are to be sold by Andrew Crooke, 1640; — The Workes of Benjamin Jonson. The second volume. Containing these Playes, viz. 1 Bartholomew Fayre. 2 The Staple of Newes. 3 The Divell is an Asse. 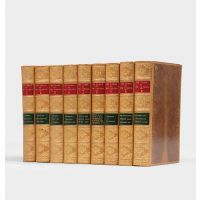 First complete collected edition, comprising the second edition of volume 1 and the first edition of volumes 2 and 3. The first volume is a close reprint of the first edition of 1616. The second volume contains the reissued, unsold sheets of three plays published in 1631, which were edited by Jonson and intended to supplement his 1616 Workes. The balance of Volume 2 contains masques, plays, and miscellaneous writings edited by Sir Kenelm Digby; it became known almost immediately as the "third volume," despite the absence of an explicit title to that effect. The order of the contents of the third volume varies, but this copy follows Greg.
Jonson's original decision to publish his collected works and include plays, then generally regarded as an ephemeral form of literature, broke new ground. Its publication in 1616, the very year of Shakespeare's death, consolidated Jonson's position as England's foremost living author. The folio created a notion of authorial ownership and identity that is recognizably modern, and it was to serve as an important model for similar collected editions later in the century, not least the first Shakespeare folio of 1623. The expansion of Jonson's works in this complete collected edition coincided with the span of production of the second Shakespeare folio, first published in 1632 and reissued in 1640, and kept Jonson in step with his old friend and theatrical rival.

Vol. 1: engraved architectonic title-page by William Hole, engraved frontispiece portrait of Johnson by Robert Vaughan with verses beneath, section-titles for each of the component works; Vol. 2: general title-page with woodcut printer's device (McKerrow