Skip to the beginning of the images gallery
CHAUCER, Geoffrey.

with dyvers workes whiche were never in print before: as in the table more playnly dothe appere.] 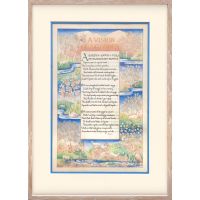 A Vision of a Garden.

First complete collected edition of Chaucer and the first attempt to collect into a single volume the complete writings of an English author, this copy in contemporary blind-tooled calf being much the most complete to have appeared in commerce in the past 40 years.

The editor was William Thynne, clerk of the kitchen and of the green cloth to Henry VIII, and recipient of numerous grants and appointments. Thynne provides the first printed editions of many of Chaucer's major works in verse and prose, including The Book of the Duchess, The Legend of Good Women, Boece, and The Treatise on the Astrolabe. He also includes several works not by Chaucer, including poems by John Lydgate, Thomas Hoccleve, Richard Roos, and Robert Henryson, giving the volume an additional value as a poetical miscellany. Thynne's "was the first attempt at a critical edition and for over 200 years provided the standard text of The Canterbury Tales" (Hayward). The introductory materials to the edition are prefaced by an unsigned dedication to Henry VIII by Sir Brian Tuke, the king's secretary, arguing for the poet's pivotal role in the development of the English language.

The Canterbury Tales alone had been first printed by Caxton, first without and then with woodcuts, before Pynson attempted something like a collected edition in three separate publications of c.1526. In the present edition, only The Canterbury Tales is illustrated: the cuts of the Knight and Squire are copies from Pynson's 1526 edition (Hodnett 2066, 2067), while the remaining 13 were cut for Caxton's 1483 edition (Hodnett 214-236).

As Joseph A. Dane points out, this is a landmark edition in many ways. It is the last edition that modern editors suspect may have been printed, in part, from manuscripts no longer available. All arguments concerning the Chaucer canon, up to and including those by Skeat, take as their foundation Thynne's inclusion of them in this edition, the first avowedly designed to be complete. Later editions add minor works, but always at the end, and none of those included here are omitted until the 19th century.

The book is attractively printed in a continental batard, harking back to Pynson's type 2, rather than in the self-consciously medieval blackletter (textura) of later Chaucer editions. Chaucer was never again printed in any type resembling this, but the monumental format of a double-column large folio gathered in sixes remained the model for later canonical vernacular authors, notably Shakespeare and Jonson.

The publisher Thomas Godfray was associated with some of the more radical propagandists of the Tudor revolution and Thynne's edition began a gradual process in the 16th century by which Chaucer was both established as the father of English poetry and claimed for the nation as a proto-Reformer, so that John Foxe the martyrologist would later acclaim him as "a right Wycliffian".

The only other substantially complete copy to have appeared in the past 40 years was the William Morris-Richard Bennett-Michael Tompkinson-Albert May Todd copy, lacking six leaves (A1, A4, Uuu1, Uuu2, Uuu5 & Uuu6) and the lower outer portion of Ttt4, sold at Sotheby's, 10 July 2003, lot 76. Though Morris used Skeat's Victorian edition as his copy text, his own copy of the 1532 Thynne folio surely supplied inspiration for the Kelmscott Chaucer.

Folio (312 x 213 mm). Contemporary blind-tooled calf lifted from the original binding and relaid on heavy boards and rebacked to style (a pencilled note dates the restoration 1946), the sides panelled with a stylised wheatsheaf roll and a decorative roll incorporating heads, the fore edges showing the marks where clasps and catches were formerly attached. Housed in a dark brown cloth flat-back box.

394 (of 397) leaves (lacking A1-3, supplied in good quality facsimile). Continental batard type, text in double columns. 20 woodcut illustrations from 15 blocks, section-titles within woodcut compartments (McKerrow & Ferguson 19) for "The Romaunt of the R

Early ownership inscriptions of John Rappe in French, one in The Romaunt of the Rose (foot of sig. 2E3v) dated 8 June 1583; early ownership inscriptions of Ro: Tirell (=Tyrell) at head of The Canterbury Tales part-title and again at head of The Knight's Tale, and of Thomas Lanham at foot of Troylus and Creseyde part-title; some early underlines and contemporary marginalia throughout; front free endpaper with pencilled note (in the hand of Lord Kenyon?) stating that the book was bought in 1891 at Christie's at the library sale of Captain Walter Tyrell, i.e. Walter Robert Tyrell (1811-1891) of Suffolk; modern bookplate of Robert S. Pirie. A few minor marks or stains, small paper extension at upper outer corner of A4 and lower outer corner of 3G5 and 3M6, not affecting text; short marginal tears neatly closed not affecting text to some 19 leaves (B1, G5, I2, I3, L1, N5, N6, K2, U6, 2R4, 2S1, 2S5,6, 3B2,3, 3E4, 3K4, 3Q1, 3T5); paper restoration in lower margin of "2Q3".1; paper repairs into text to N1, 2S6 (with small loss of text) and 3B4; last leaf 3V6 with paper restoration at upper outer corner with loss of end of folio number and one letter of colophon; these repairs mostly unobtrusive and affecting text in a couple of places only, the paper strong and generally clean, with good margins all round, overall a very good copy.

A Vision of a Garden.