Skip to the beginning of the images gallery
LYTTELTON, George, Lord.

Formerly printed separately: and now first collected together, with some other pieces never before printed. Published by George Edward Ayscough, Esq., The third edition: to which is added a general index. 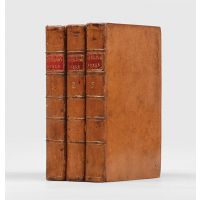 Third and best octavo edition (with the index), first published in 1774 and gathering various political pieces, Lyttelton's "Letters from a Persian in England to his friend in Ispahan", his very popular Dialogues of the Dead, co-written with the bluestocking Elizabeth Montagu, a smattering of poems, and a collection of letters to his father Sir Thomas Lyttelton.

An attractive set in unassuming contemporary calf, with an interesting provenance: from the library of the Scottish slave-trader, merchant and diplomat Richard Oswald (1705?-1784), with the simple booklabels of Auchincruive House, his Adam-designed mansion in south Ayrshire, and the ownership inscriptions at the head of the text in each volume of his grand-nephew, Richard Alexander Oswald (1771-1841), Liberal MP for Ayrshire and author of pamphlets opposing the Corn Laws.

Richard Oswald was a major figure in the slave-trade of Georgian Britain. The distinguished historian Adam Hochschild gives a compelling summary of his significance: "Oswald had learned the import-export business in several corners of the empire: Glasgow, Virginia, and Jamaica. In 1746, he settled in London, where, from a modest brick home and office at 17 Philpot Lane, he rapidly built up an international trade in slaves and in a wide range of goods, from horses to wigs. He sold tar and turpentine to the Royal Navy, and wagons, hay, and more than five million loaves of bread to the army. Before long he came to own shares in ships and in slave plantations in South Carolina, Jamaica, and Florida. Oswald's ships could then carry slaves from his depot-fortress at Bance Island Sierra Leone to his plantations in the Americas, and return to England loaded with their sugar or tobacco. Although his business ranged as far as India, its core was the triangle trade. With lucrative investments in each corner of the triangle and in the ships that sailed among them, he amassed a fortune of some 500,000, roughly equal to 68 million today... His contemporaries saw him as a wise, thoughtful man who embodied the Scottish virtues of frugality, sobriety, and hard work, and who spent all his spare time reading, often far into the night. He supervised the construction of a home library with sliding glass panels that contained more than two thousand books of theology, philosophy, literature, and history... Among those who shared conversation at his London dinner table, or could hunt pheasants while visiting his 100,000 acre estate in Auchincruive, Scotland, were Benjamin Franklin and the writers Laurence Sterne and James Boswell. Oswald played a major role in Scottish road building, gave to charity, and... would represent his country on a crucial diplomatic mission as an American Revolution treaty negotiator. Although Bance Island was a cornerstone of his fortune, one way in which he was typical of the Britons who reaped the greatest profits from the Atlantic slave economy was that he never set foot in Africa" (Bury the Chains: Prophets and Rebels in the Fight to Free an Empire's Slaves, 2005, p. 27).

The Auchincruive library was broken up in 1922 (Sotheby's 1 May) and Seymour de Ricci notes that it included some "very fine 18th-century French books, in old morocco bindings" (English Collectors of Book & Manuscripts, 1930, p. 190), reflecting the exceptional quality of the library as a whole.

With the 20th-century bookplate of Robert J. Hayhurst, an avid collector of naval history and 18th-century literature in contemporary bindings, of which this is an excellent example. Bindings a little rubbed, scattered foxing but a very good set.