Skip to the beginning of the images gallery
JOHNSON, Samuel.

A New Edition. To Which is Prefixed an Essay on His Life and Genius, by Arthur Murphy. 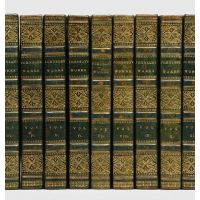 The Lives of the Most Eminent English Poets.

Dictionary of the English Language.

A Dictionary of the English Language: 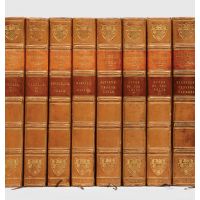 A beautifully bound set of an attractive edition, printed in a large legible type. Arthur Murphy's Essay on the Life and Genius of Samuel Johnson was first published in 1792.

With an appealing Scottish provenance: ownership inscription at head of title pages, "Mrs Forbes, Echt House", Aberdeenshire. This was the home of James Forbes (1775-1850), who married in 1801, Jane Niven (1795-1842); thence by descent to Anthony Keith-Falconer, 7th earl of Kintore (1794-1844), with his small embossed stamp on blanks before each title, a fox head over a scroll bearing the motto "Floreat Scientia" (let knowledge flourish). Kintore was a keen, and notoriously reckless, huntsman, "at his hunting box in Scotland, which he called "The Peat Stack,"on all the china, glass, and plate, was a fox's head engraved, with the motto 'Floreat Scientia,' and he had the same device on his travelling carriage" (Loder-Symonds, A History of the Old Berkshire Hunt from 1760 to 1904, 2013). That doyen of nineteenth century sporting writers, Charles James Apperley ("Nimrod"), described him memorably, "he is as hard as flint. A muddy ditch is a bed of roses to Lord Kintore" (Hunting Reminiscences, 1843, p. 214).

The Lives of the Most Eminent English Poets.

Dictionary of the English Language.

A Dictionary of the English Language: