Skip to the beginning of the images gallery
KELMSCOTT PRESS: CHAUCER, Geoffrey. 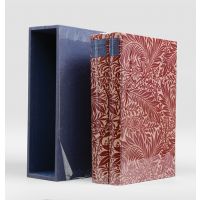 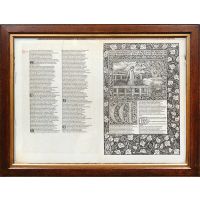 Limited edition, one of 425 copies on paper from a total edition of 438. The book was originally issued in either the standard Kelmscott binding of quarter holland boards or in full pigskin by the Doves Bindery. The quarter holland boards were essentially too flimsy for this, the most ambitious and magnificent book of the Press, and many copies were subsequently put into commissioned pigskin or morocco bindings.

The most ambitious and magnificent book of the Press, it was four years in the making. Morris designed the watermark for the paper, which was copied from an Italian incunable in Morris's collection and made entirely of linen by Batchelor. It took several requests before Clarendon Press granted permission to use Skeat's new edition of Chaucer. Burne-Jones called the book "a pocket cathedral it is so full of design", and "the finest book ever printed; if W.M. had done nothing else it would be enough." Burne-Jones devoted all his Sundays for almost three years to the work, and Morris came to talk with him as he drew. As the artist worked he increased the number of proposed illustrations from 48 to 60 to 72 to 87, and Morris accepted each change. The process of adapting the drawings to the woodblock, and engraving them, was entrusted to W. H. Hooper and R. Catterson-Smith, with Burne-Jones closely supervising every detail. Of these lovely pictures, those for the Canterbury Tales, the Romaunt of the Rose, Troilus and Criseyde, and the Legende of Goode Wimmen are better known than those for Chaucer's translation of Boethius, his prayer to the Virgin, the Parlement of Foules, A Treatise on the Astrolabe, and the surrealistic House of Fame. All are equally beautiful, and all contain images which remind one strongly of his paintings. "The Kelmscott Chaucer is not only the most important of the Kelmscott Press's productions; it is also one of the great books of the world. Its splendour can hardly be matched among the books of the time" (Ray, The Illustrator and the Book in England).

Some foxing to edges, overall an excellent clean copy in a fine binding.