Skip to the beginning of the images gallery
(BLAKE, William.) ELLIS, Edwin John, & W. B. Yeats.

Poetic, Symbolic, and Critical. Edited With Lithographs of the Illustrated "Prophetic Books", and a Memoir and Interpretation. 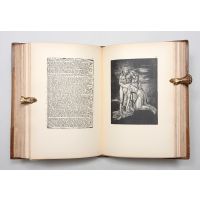 First edition, one of 150 large paper copies in the deluxe binding; there were also 500 copies in cloth. Yeats had "marked down William Blake as a master early on, and with Edwin Ellis produced a large-scale commentary on Blake's prophetic writings in 1893. While often erratic and idiosyncratic, it helped establish the importance of Blake's esoteric verse" (Yeats, ODNB). Yeats later identified the nature of the collaboration, explaining that the book was "mainly Ellis's, the thinking is as much mine as his" (Wade p. 224). Ellis had greatly expanded Yeats's original biographical section and was solely responsible for the "the 'literary period', the account of the minor poems, & the account of Blake's art theories"; "the greater part of the 'symbolic system' is my writing".

Ellman suggests a certain level of self-interest for Yeats in the project. "He was pleased to find that Blake's ideas harmonized with those of the Theosophists and the Hermetic Students of the Golden Dawn, for he now had the authority of a great poet for using occult material Blake, in short, bore an astonishing resemblance to Yeats, extending even to his initials Here was a lofty justifying precedent" (Yeats, The Man and the Masks, p.117). Despite its faults, this is an important work, making available the Prophetic Books in the later 19th century, and helping to rescue Blake from a reputation for mere eccentricity.

Tissue-guarded photogravure portrait frontispiece to each, numerous plates throughout, the Prophetic Books reproduced in facsimile, 2 folding tables. 2 pages from The Listener, 9 October 1958, with a transcription of Kathleen Raine's broadcast "A Traditio

A little rubbed, some scuffing and scrapes to the spines and corners, volume III more heavily so with a repair at the tail if the rear hinge, the spine creased and with repair at the tail, some recolouring, front hinge of volume I just started, both hinges of volume III repaired, the lower restarting, pale toning and occasional spotting to the text, slight damp-staining at the rear of volume II, just affecting the fore-edge margin of the last 30 or so pages, overall very good.