Skip to the beginning of the images gallery
CHERRY-GARRARD, Apsley.

Antarctic 1910-1913; [with] CHERRY-GARRARD, Apsley. Postscript to the Worst Journey in the World; [with] SEAVER, George. A. C-G. 1886-1959; [together with] two autograph letters signed from Apsley and Angela Cherry-Garrard. 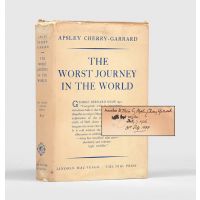 The Worst Journey in The World.

Interesting group comprising two polar rarities, a first edition of The Worst Journey in the World, and two autograph letters. The Worst Journey in the World, "the best written and most enduring account of exploits in the Antarctic" (Taurus) and "widely regarded as the masterpiece of polar exploration" (Books on Ice), is presented here in Cherry-Garrard's preferred "Polar" binding of cloth-backed boards.
Accompanying The Worst Journey is a copy of the first and sole edition of the rare offprint of George Seaver's 31-page biography of Apsley Cherry-Garrard, accompanied by an autograph letter signed from Apsley's wife Angela, to "My dear Jean", presenting "this little memoir about Cherry"; she goes on to note that "The Worst Journey has just come out again and the Rev. George Seaver wrote this as a Foreword to the new edition" (2 pp., dated 14 December 1965, embossed letterhead of "Colegates", her home near Westerham, Kent). It appeared as the Foreword to the 1965 Chatto & Windus edition of The Worst Journey, described by Rosove as "a significant edition", being the first to be published after Cherry-Garrard's death in 1959 and was almost certainly intended for presentation to a very small coterie of those close to Cherry-Garrard. Copac and OCLC locate two copies only, at the British Library and Museums Victoria Library.
It is also accompanied by a copy of the "Postscript to the Worst Journey in the World", described by Rosove as "very rare", an offprint of the Postscript to the 1951 edition, printed for the author, which re-examines the polar party's fate. Rosove notes a single example, a presentation copy from Cherry-Garrard to George Seaver, at the Scott Polar Research Library, Cambridge; WorldCat adds Brown University and British Antarctic Survey (Cambridge) only; we have traced no copies on auction records.
An autograph letter signed from Apsley Cherry-Garrard to "Dear Mr. Savill" completes the quintet of items. In it, he returns a book and remarks that he has tickets for the cricket: "I have kept this book far too long. I am very interested because I am interested in Curzon who came out of it as a most awful blackguard which I am inclined to think he was We have tickets for the Test Match at Lords". It was Curzon who, as president of the RGS, decided not to hold a public committee of inquiry, and of whom Cherry-Garrard wrote "The Committee (Curzon) meant to hush up everything. I was to be sacrificed" (Annotated Diary). The Test series that summer was against New Zealand with all four matches being drawn (1 pp., dated 2 May 1949, addressed from 23 Dorset House, his London address after he was forced to sell his country house, Lamer, in 1947; Dorset House is an art deco block some 20 minutes from Lord's). The recipients of this correspondence were Jean and Norman Savill, of Savills estate agents.
"Cherry-Garrard seems an unlikely hero of Antarctic exploration, but he has achieved that status largely through this book a young but wealthy patrician, near-sighted and frail, he paid his way onto the crew as an assistant zoologist, but performed splendidly in many harrowing situations" (Books on Ice). The "worst journey" referred to in the title is not "Scott's ill-fated rendezvous with death," but the earlier Ross Island Winter Journey, from Cape Evans to the penguin colony at Cape Crozier, with Edward Wilson and Henry "Birdie" Bowers. Both of his companions on this trip were to die on the Southern Journey with Scott, Cherry-Garrard being with the last group sent back before the final assault on the South Pole; he was also sent to rendezvous with the returning party of Scott and his four companions, and was the discoverer of the tent and their frozen bodies.

Colour frontispieces with tissue guards, 4 other coloured plates in all, 43 black and white plates, 5 maps, 4 of them folding.

Postscript to the Worst Journey in the World, Printed for the Author, 1951: 2 large folded unopened sheets, with integral title page, creased at edges. Provenance: ownership inscription to front free endpapers, "S. G. Loveday, 1922". Loveday served in the Great War as a captain with the 10th battalion, Middlesex Regiment, posted to India in 1914; previously, he had played cricket for The City of London School. Spines cocked and a little worn with some loss of fabric, labels creased and chipped, yet the bindings remain sound and the set internally clean.

The Worst Journey in The World.