Skip to the beginning of the images gallery
(RELIGION.) 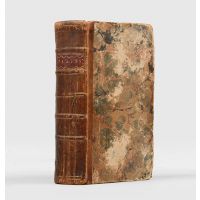 A collection of religious tracts, predominantly Scottish imprints and mostly dating from the last decade of the 18th century, and bound soon after. The collection provides a valuable illustration of popular theology of the time, with many of the works present going through many editions, while two of the works are apparently unrecorded. Comprising:

i) SCOTT, Thomas. A vindication of the divine inspiration of the holy scriptures, and of the doctrines contained in them; Being an answer to the two parts of Mr. T. Paine's age of reason. By Thomas Scott, chaplain to the Lock Hospital. London: Printed by D. Jaques, 1796.

First edition of this work by the clergyman Thomas Scott, who had attacked Paine before in his 1792 work "The Rights of God".

iii) HALDANE, James Alexander. Journal of a tour through the northern counties of Scotland and the Orkney Isles, in autumn 1797. Undertaken with a view to promote the knowledge of the gospel of Jesus Christ. Edinburgh: Printed for J. Ritchie, 1798.

iv) MUIR, George. The substance of four table-services; delivered in the Tolbooth-church of Edinburgh, on the 16th day of March, 1760. Edinburgh: sold by John Ogle, 1794.

Unstated second edition, first published the previous year. A highly scarce item, with Library Hub listing only one known copy of this edition and just two of the previous edition.

v) BURDER, Samuel. A concise directory for the profitable employment of the Christian Sabbath. London: Printed for S. Rousseau, 1800.

First edition, one of two issues with varying title pages. Library Hub lists just 7 copies for both issues. The verso of the title page has been repaired.

vi) SERLE, AMBROSE. The way to be happy in a miserable world. Edinburgh: Printed by J. Ritchie, for the Society for Publishing Religious Tracts, 1799.

Presumed first Scottish edition, apparently unrecorded. The short pamphlet was printed many times but generally did not survive, with the earliest known surviving example being a Welsh translation of 1789.

vii) WEBSTER, Alexander. The wicked life, and fatal but deserved death, of Haman, Ahasuerus's prime minister: A sermon, preached before the magistrates of Edinburgh, on the day of election, in the year 1740. Edinburgh: Printed, and sold by J. Guthrie, & J. Ogle, Edinburgh; G. Peattie, Leith; and the other booksellers, 1797.

The third (stated second) edition, first published in 1740. A scarce item, with only four known copies of this edition in institutions.

Presumed first edition, apparently unrecorded. A 16 page edition (as opposed to the present 12 page edition) from 1800 is known in a single copy in the National Library of Scotland, and a 4 page edition, of unknown date, is in Manchester University Library.

ix) WEBSTER, Alexander. Divine influence the true spring of the extraordinary work at Cambuslang and other places in the west of Scotland,illustrate; sic in a letter from the Reverend Mr. Alexander Webster one of the ministers of this city, to a gentleman in the country. Edinburgh:Printed by T. Lumisden and J. Robertson, 1742.

First edition, with a second edition following the same year, and an edition in Boston the year afterwards. Alexander Webster (1707-1784) was a Church of Scotland clergymen, a key figure in the traditionalist faction of the Church.

x) WALLER, William. Divine meditations upon several occasions, with a daily directory. By a person of honour. Edinburgh: Printed for the Society for Publishing Religious Tracts, 1794

Fourth edition, originally published in 1680. The title page is a little soiled and creased. William Waller (1597-1668) had been a Parliamentary general during the English civil war.

xi) FULLER, Andrew. The Nature and Importance of Walking by Faith. Edinburgh: Printed by J. Ritchie, 1800.

Third edition, first published in 1784. Andrew Fuller (1754-1815) was a Baptist theologian and one of the founders of the Baptist Missionary Society.