Skip to the beginning of the images gallery
MOUZÉ, M. 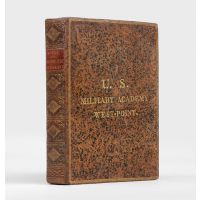 First edition of this influential work of practical military engineering, this copy with the pencilled ownership inscription of Joseph Gardner Swift, the first graduate of West Point and its second superintendent, to the title page. Swift was appointed a cadet in the Corps of Artillerists at Newport, RI on 12 May 1800, transferring to West Point in October 1801; "On March 16, 1802, the United States Military Academy was formally established to provide for the training of cadets at that place, instead of with their several organizations as formerly Swift and one other, commissioned second lieutenants on Oct. 12, 1802, are regarded as the first graduating class" (DAB). He advanced rapidly, "the rapid expansion of the tiny American army gave Swift correspondingly rapid promotion", becoming colonel and chief engineer of the army, and de facto superintendent, or commanding officer, of West Point in 1812 at the age of 28. In the field for the abortive invasion of Canada in 1813, the following year he was brevetted brigadier-general for his services and placed "in charge of the fortifications of the city of New York". When the government introduced the French engineer Simon Bernard as head of the Board of Engineers, in charge of all practical fortification work, Swift continued in his role as superintendent of West Point for two years before"finding the situation intolerable he resigned from the army". He continued as surveyor of the port of New York until 1826, subsequently being employed as chief engineer of several railroads, and from 1829 to 1845 "he was a civil engineer in government service, in charge of harbour improvement on the Great Lakes He was perhaps the first American engineer of distinction whose training was acquired wholly in the United States". It would certainly seem that this French-bound copy of Mouzé, with its imposed West Point supralibros, is one of the thousand French books acquired by Sylvanus Thayer - Swift's successor as superintendent in 1817, and widely recognised as "the Father of West Point" for his programme of modernisation - during his extensive government-sponsored "tour of study in France" (Gat, The Development of Military Thought: the Nineteenth Century, p18). Under Thayer "the academy was thoroughly reorganised with a view to making it the seedbed of an increasingly professional, though miniature army". Swift died at Geneva, N.Y. in 1865, this book evidently passed to his son Commodore Jonathan Williams Swift - named for Swift's predecessor as superintendent of West Point - and was presented to Hobart College Library by his widow in 1890, the presentation recorded on a bookplate to the front pastedown. The connections to Swift and to Thayer imbue this volume with the strongest possible associations to the foundation of America's premier Military college.

20 folding engraved plates at the rear, half-title bound in.