Skip to the beginning of the images gallery
PARSONS, Abraham.

A Voyage from Bussora to Bombay, and along the Western Coast of India; A Voyage from Bombay to Mocha and Suez in the Red Sea; and a Journey from Suez to Cairo and Rosetta in Egypt. 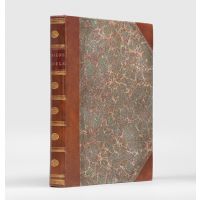 First edition. Little is known of Parson's origins, he was probably born in Bristol, the son of a merchant captain. "In early life he visited many countries in command of merchant vessels, an occupation that suited a man 'naturally fond of novelty, and remarkably inquisitive'" (ODNB). He unsuccessfully tried to establish himself as a merchant in Bristol, but in 1767 was approached by the Turkey Company to become their "consul and marine factor" at Iskenderun, Aleppo's port, where he worked for six years before ill-health forced him to resign. Subsequently he travelled extensively for "commercial speculation, making several journeys in Asia Minor in 1772-4, and travelling from Iskenderun through the mountains to Aleppo. From there he crossed the desert to Baghdad, where he stayed between May and October 1774. He travelled up the Euphrates to Hillah and downriver to Basrah, where he was during the siege by a Persian army in 1775. He next visited Bombay, and then - ever inquisitive - made a lengthy voyage along the west coast of India as far as Goa, returning to Bombay early in 1776. In 1778 he travelled via the Red Sea and Egypt, and visited Mocha, Suez, Cairo, and Rosetta. Having returned to Europe in the same year he retired to Leghorn, where he died in 1785."
He left his manuscript account to his brother-in-law, the Revd John Berjew of Bristol, whose son, the Revd John Paine Berjew, edited it for publication. Parsons was as curious and attentive traveller, his observations giving "insights into the various places that he visited, including Bombay, Mocha, and Cairo. Everywhere he took much interest in commerce, government, and ways of life", of particular interest are his account of the preparations at Cairo for the inundation of the Nile, and of its effects; and his description of "the 216 groups making up the grand procession of pilgrims to Mecca".
Abbey notes an octavo edition of 1802, apparently in error.

Frontispiece of Baghdad, plate of Antioch, both uncoloured aquatints.

Frontispiece somewhat browned, a little creased and with a small repair at the inner margin, overall a little browned, a minor paper repairs to corners of a few leaves, slight damp cockling in the lower margin, particularly towards the rear, but remains a very good copy.