Skip to the beginning of the images gallery
HODGES, William. 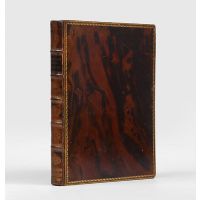 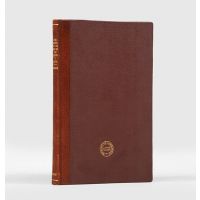 A Report of the Arguments in the case of The Queen V. The Hon. & Rev. W. Capel, as to the Rating of the Occupiers of Land and Tithe Owners.

First edition, in a superior Regency binding; a second edition was published the following year. "The first professional landscape artist to visit India and please such tastes for the picturesque and the sublime was William Hodges (1744-1797). He went with a highly individual vision and style of painting which had been formed while he was official artist on Captain Cook's second voyage to the Pacific between 1772 and 1775. Hodges had served his apprenticeship with Richard Wilson and had learnt to paint landscapes in the classical tradition, producing calm wooded scenes lit by a soft glow, the foreground peopled with classical figures. With Captain Cook Hodges was suddenly jerked into observing nature in a completely different way
"His First year in India was disappointing. Hodges's health was poor and the Second Mysore War (1780-84) against Haidar Ali was in progress. This made it impossible for him to explore the countryside of South India freely and he was confined to Madras and its immediate environs. On moving to Calcutta in February 1781, however, he was to travel far more widely through the generosity and patronage of the Governor-General, Warren Hastings, a man of broad culture.
"During 1781 Hodges made two tours up-country with him during which he saw the ruins of many Muslim palaces, tombs and mosques. The next year he found a patron in Augustus Cleveland, a liberal administrator stationed at Bhagalpur in Bihar. Touring with him Hodges saw a very different India - the forested tracts inhabited by an aboriginal people, the Paharias. During 1783 he made a long expedition up-country to join Major Brown who was heading a diplomatic embassy to the Mughal Emperor. Hodges was now able to see the great Mughal monuments at Agra and Sikandra. He returned through Central India to Calcutta via Lucknow and left India in November 1783" (Archer & Lightbown, India Observed: India as viewed by British Artists 1760-1860, Victoria and Albert Museum 1982, pp. 8-9).

14 engraved plates (9 of them views) by Medland, Byrne, Angus and others after Hodges, large folding engraved map of part of Bengal and Bihar.

With the directions to the binder bound in. Joints and extremities rubbed, a few light scuffs and scattered faint craquelure to sides, tide-mark to top edge of pp. 92-3, the text unaffected, otherwise a few trivial spots or marks, Pass at Sicri Gully and Zananah plates transposed, very short closed tear to folding map stub. An excellent copy, the contents crisp and fresh and with no trace of the usual offsetting or browning.

A Report of the Arguments in the case of The Queen V. The Hon. & Rev. W. Capel, as to the Rating of the Occupiers of Land and Tithe Owners.