Skip to the beginning of the images gallery
PASHINO, Petr Ivanovich. 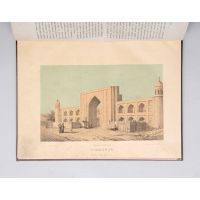 First and only edition, decidedly uncommon, an online search of institutional libraries showing only 9 locations worldwide, and just a single copy at auction in the last 50 years. A keenly observed and highly desirable insider's account of the early days of Russian Turkestan, with a focus on Tashkent - capital of Russian Turkestan and now of Uzbekistan - and its surrounding area at the time of the Russian annexation. One of the few contemporary plate books of the region.

On the establishment of the new Russian Governor-generalship of Turkestan in 1866, Petr Ivanovich Pashino (1838-1891), was transferred from his posting as junior secretary to the embassy in Teheran, to Tashkent, the administrative centre, as "agent of the Minister of Foreign Affairs". Pashino, is described by Charles Marvin in the monitory chapter dedicated to him in Reconnoitring Central Asia as "Pashino, the Russian Secret Agent", and he does indeed seem to have been some sort of minor operator within the complex machinations of the Great Game. On graduation from St. Petersburg, he was sent to Kazan Imperial University, at the time one of Europe's foremost centres for Oriental Studies, where "he spent several years in philological investigations", and it was his wide-ranging knowledge of Asian languages that led to his being recruited by the Russian government in 1861. He travelled extensively across Asia, often passing himself off as a Muslim, claiming that going incognito had once saved his life in Afghanistan, and it certainly helped to him to obtain a remarkably intimate and detailed portrait of the lives of the peoples of this region, in both the cities and on the steppe, which continues to be drawn upon by historians and ethnographers to this day. The work also offers an excellent visual record, the majority of the plates are of Tashkent, with views of madrassahs and mosques, street scenes, but also the courtyard of the home of Said Azim Muhammed Bai, a wealthy merchant who had been one of Gen. Cherniaev's leading supporters in the Russianization of the city after its conquest, "Seid Azim spoke Russian and moved comfortably within the worlds of both imperial and local business and politics. He had previously gained the favour of tsarist administrators by buying the freedom of Russian slaves in the region. Seid Azim's goals extended beyond gaining lucrative contracts or a leading position within the colonial administration. Letters to tsarist officials attest to his strong commitment to improving local education under Tashkent's new rulers" (Sahadeo, Russian Colonial Society in Tashkent, 1865--1923, pp.20-1). Other localities include Khodzent, now Khujand in Tajikistan, and Turkestan and Chimikent, or Shymkent, both now in the South Kazakhstan Region of Kazakhstan. Two of the plates are from photographs by Mikhail K. Priorov, which are probably among the very first photographic records made in Central Asia. The map is also of particular interest, being the first based on the accurate surveys made of the region following the Russian advance. Pashino's career did seem destined for greatness, when Abdur Rahman, grandson of Dost Mohammed Khan sought refuge in Samarkand in 1869, Pashino, being the only pashto speaker in the region, was appointed his interpreter and garnered some considerable influence thereby, his opinions on the situation in Afghanistan being thought authoritative. However, Pashino did not "possess the qualifications of a diplomat", being instead "rash, headstrong, egotistical and loquacious, which defects rendered him ill-adapted for the intrigues which Kaufmann was always conducting in Central Asia" (Marvin, "Pashino, the Russian Secret Agent", Reconnoitring Central Asia, p.255). He was recalled to Russia in 1873, just before the invasion of Khiva, and after several further postings was sent to Tiflis, but "the Russian Government, which is ready to make use of any instrument, could do nothing with him. Deprived of the support of the Tifiis authorities, he made his way to St. Petersburg, and tried to earn a few roubles by writing feuilleton articles for the newspapers. Before long he quarrelled with this support, and, throwing it up, was reduced to the condition of the direst necessity. A few months ago, in crossing a street, he was knocked down and run over by a carriage, and is now a cripple in the paupers' ward of one of the St. Petersburg hospitals" (Marvin, p.262).

20 tinted lithographic plates, 5 of them two-tint, the remainder single-tint; wood-engraved title-page vignette, and cleverly worked, illustrative wood-engraved historiated initials to each of the 17 chapters, with vignetted illustrations as tailpieces to

Pre-1917 library ink stamps and inked accession notes to the title page,and three other pages, errata page with a small hole repaired with paper, minor ink stains on the top corners of several leaves at rear; some marginal finger-soiling, but overall a very good copy with beautiful sound plates.