Skip to the beginning of the images gallery
(LOVECRAFT, H. P.)

Latin Literature of the Empire, selected and edited, with revised texts and with brief introductions by Alfred Gudeman. In two volumes: Vol. 1 Prose: Velleius-Boethius; Vol. 2 Poetry; [and] A Survey of Greek Civilization, by J. P. Mahaffy. 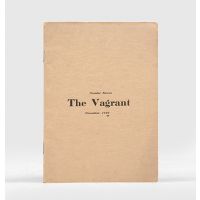 H. P. Lovecraft's own classical reference copies from his library, each volume with his ink ownership inscription to the front free endpaper: Greek Civilization with "H. P. Lovecraft, Providence, R.I.", and the Latin Literature volumes with his name and fastidious manuscript shelf marks "16:46 / 525:1" and "16:46 / 525:2". There is also an additional autograph note in Lovecraft's hand to the Poetry volume of Latin Literature, on p. 411 relating to the Pervigilium Veneris ("The Night Vigil of Venus", an anonymous paean celebrating Venus as a springtime nature goddess): "Note: Mr Parnell hath made a very elegant tranflation of this poem, tho' he afcribes it to the claffic age and to Catullus". The anachronistic diction in "hath", and the "f" form of his "s"es, is highly characterful, revealing Lovecraft's readiness in the private of his own library to imagine himself as an 18th-century gentleman, a sensation which his ownership of these classical works might have helped to reinforce. In one of his famous letters to Robert "Doc" Lowndes (published in Crypt of Cthulhu magazine 62, 1989), Lovecraft declared: "The streak of Gothic fancy in my literary attempts is really a sort of contradiction of my general temperament or at least, of the intellectual side of my temperament. Classical - & especially Roman antiquity has always been my chief animator, & I have a parallel sense of identification with the eighteenth century, which drew so many of its typical elements from the classic Roman world." The Latin Literature volumes include (in the original language) extracts of Apuleius, Boethius, Lucan, Seneca, Petronius, Plinys Elder and Younger, among others, and Mahaffy's Survey of Greek Civilization spans from the Homeric age up to the Hellenistic world and the survival of Greek culture under the Roman Empire. The books emerged at Swann auctions, 10 January 1974 (a photocopy cutting from the catalogue is loosely inserted in each volume), with these two classical works appearing as part of lot 256, the third item in the lot being an unrelated work on political economy.

Two works in three volumes, octavo. Original green and brown cloth, titles gillt to spine, and additional titles and decoration to Greek Civilization in black to spine and front. Each work housed in a separate cloth folding case with "Lovecraft's Copy" on gilt leather label to front.

Photographic fronitspiece and other plates in Greek Civilization.