Skip to the beginning of the images gallery
(WORLD WAR I: MEUSE-ARGONNE OFFENSIVE.) 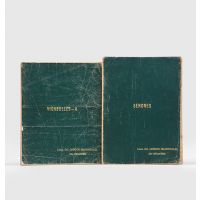 A pair of fascinating, extensively annotated maps used in the field by an officer serving with the 81st "Wildcat" Division of the American Expeditionary Forces during the closing months of the Great War, in particular the Meuse-Argonne offensive of September-November 1918, a brutal encounter in which the AEF suffered casualties in excess of 120,000 men.

Lieutenant-Colonel Gordon Macdonald was commanding officer of the 3rd battalion 324th US Infantry Regiment, 81st Division, part of the US I Army, and was unattached to any corps, the division operating as an individual unit. The Vigneulles map shows the situation at 8:00 am on the morning of 9 November 1918 and is heavily annotated by Macdonald in blue and red pencil, graphite and pen and ink (although inexplicably misdated "1920"). Macdonald notes that he received the "Plan of Attack" at 11:00 pm the preceding night and that copies were then transmitted to various regimental battalions and companies, which he identifies. To the north of the 324th are the 322nd and 323rd infantry regiments (Macdonald noting that the latter "will not advance"). The line of attack for the 324th, delineated here, was through Manheulles to Ville-en-Wöevre. Artillery observation posts and headquarters positions are also marked, and the "Sector Attack II U. S. Army", on the right flank of the 81st. Macdonald has noted at the head of the map: "This map is the property of Lieut.-Col. Macdonald and is not to be removed from his quarters". Between 8 and 11 November the 81st captured Moranville, Grimaucourt and Abaucourt. The Senones map - labelled "Secret" and annotated and dated by Macdonald in blue pencil and pen and ink - is titled by him "Organization of Sub-Sector Novion held by Third Battalion 324 US Inf.". This was part of the St. Die sector (Vosges), where the 81st remained in the front line from 20 September to 10 October. Despite holding what was considered to be a quite part of the line in the Vosges Mountains, the division suffered some 116 casualties from German trench raids and artillery fire. Macdonald has noted battalion positions, the limits of the sector, location of supply dumps, munitions dumps, HQ, kitchen, redoubts, and observation posts. Most tellingly he has noted which positions are "under direct enemy observation" from German units on higher ground in this very difficult mountainous and heavily wooded terrain; the deployment of the 324th was centred on the town of Celles-sur-Plaine, which lies in a valley.

According to the "Princeton Alumni Weekly", Gordon Macdonald became "a special partner in the Stock Exchange firm of Seasongood, Haas & Macdonald, 60 Broadway, New York. He is living at Morristown, NJ. Gordon finished his army service with an honorable discharge on May 24, 1919, as Lieutenant-Colonel of the 324th Infantry. He was in action on the St. Die sector (Vosges) September and October, 1918, and in the Meuse-Argonne offensive October-November, 1918" (June 16, 1920, p. 875).

These 1:20,000 scale maps were produced by the French Groupe des Canevas de Tir des Armées (or GCTA) "a specialized cartographic military unit created at the beginning of the war and assigned to each division of the French army. It was their job to survey the terrain and update the maps used by the French army based on direct observation, aerial reconnaissance, sound ranging, and other methods. British and German military maps were based upon the Belgian Bonne projection, a method of projecting the curved surface of the earth onto a flat surface which accurately preserves distance. In 1915 the French began basing their military cartography on the Lambert projection. The projection preserves bearing and proved much more accurate and useful for plotting artillery missions The American Expeditionary Forces adopted the French Plans Directeurs trench maps for their own purposes" (New York Public Library: The Great War and Modern Mapping 2015, retrieved 31.10.17).

These two engrossing maps were annotated at various times across the campaign in the Vosges and during the enormous Meuse-Argonne offensive, the baptism of fire for the AEF during the Great War, and are fine exemplars that support the assertion that "World War I was, more than any other conflict to that point, a war of maps" (NYPL).

Covers rubbed and a little creased, particularly I, maps slightly browned and the linen support becoming frail on the folds, some "service wear", but remaining very good.