Skip to the beginning of the images gallery
(AFGHANISTAN.) 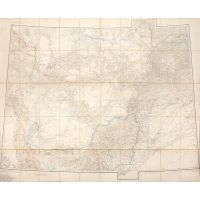 Rare and very striking wall map of Afghanistan, dated June 1901, compiled under the orders of the Surveyors General of India Major-General Charles Strahan (1895-99) and Colonel St. George Corbet Gore (1899-1904): Copac and OCLC record copies at only three institutional libraries world-wide (British Library, Wisconsin and Bayerische Staatsbibliothek). Included is a useful list of "Additional Authorities Consulted", among them maps of Karataghin and Darwaz (1882) by the Russian military topographer P. E. Kossiakoff, Kafiristan (1884) by Surgeon-Major G. S. Robertson, "Map illustrating the Havildar's and the Mulla's Routes in Wakhan, Kolab and Darwaz by Captain H. Trotter, RE" (1876, Henry Trotter was part of the Forsyth Mission of 1873-74), Routes in Persia (1893) by Sir Percy Sykes, four Russian maps (two of the Trans-Caspian, "sources of the Amu Dariya" (the Oxus), "Tehran, Askabad, &c"), and the Pamirs and Upper Oxus Regions (1894) by Ney Elias (1844-1897), an important figure in the Great Game.

The present copy has a number of interesting contemporary annotations showing a certain familiarity with the country, some in red and blue pencil, underlining place names, other pencillings connecting towns, and the frequent use of a discreet symbol in purple ink that we have not been able to identify but may be the location of way points or sangars (temporary fortified positions) established by the British; alternatively they may show known or suspected positions of Afghan tribesmen. The most prominent annotation is the manuscript addition of the name "Jani Khel" and an arrow pointing to the area on the map marked as Katawaz (the Pashto name for the town of Zarghun Shar but also the plain to the south of the town). It was a raid by Waziri Mahsuds on the flocks of the Jani Khel tribe that precipitated the Mahsud Blockade of 1900-02; the official report of operations notes that a garrison of sepoys was stationed at Jani Khel. "The blockade came into force on 1 December 1900. To enforce the blockade intended to prevent the Mashuds having any contact outside their tribal area, a line of posts was established between Bannu highlighted here in red pencil and Dera Ismail Khan... Some eight battalions of infantry, two regiments of cavalry and four sections of mountain artillery were initially employed. Some payments of the fine imposed by the British were made but outrages still continued, troops and Militia were killed and rifles and mail stolen. Originally the blockade had been seen as a relatively cheap alternative to a punitive expedition, but after twelve months results were meagre and recourse was had in November 1901 to a number of small mobile columns... the columns harassed the Mahsuds from all directions simultaneously, destroying defences, capturing men and cattle and destroying grain and crops... The tribe eventually sued for peace in January 1902... It was a sad commentary on British policy that no better method could be found to curb Mahsud intransigence" (Brian Robson, Crisis on the Frontier: The Third Afghan War and the Campaign in Waziristan 1919-1920, 2004, pp. 159-60).

Case a little sunned, only minor wear to extremities. Map in excellent condition.