Skip to the beginning of the images gallery
KORF, Feodor Feodorovich. 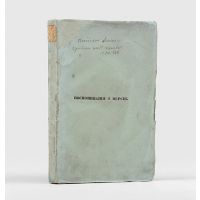 First and only edition, uncommon, with just six locations world-wide. Presentation copy from the author, inscribed on the front panel of the wraps: "To the Russian Academy, presented by the Author, 17 Nov. 1838". The book was never translated or republished in Russia. The author, Russian writer and journalist Fyodor Korf (1803-1853), describes his service as Second Secretary of the Russian Embassy in Tehran in 1834-5, under count Ivan Simonich (1794-1851) Russian plenipotentiary in Persia 1832-38. Korf went to Tabriz (north-western Iran), the residence of Mohammad Mirza Qajar (1808-48), at the time heir to the throne, travelling via Georgiyevsk (in modern-day Stavropol Krai in the North Caucasus), Yekaterinodar (Krasnodar), Vladikavkaz, Tiflis (Tbilisi), Erevan, and Nakhchivan. When Mohammad ascended to the throne as shah, Korf followed him to Teheran, after 6 months returning to Russia via Tabriz. Overall Korf was not impressed by the country, "When I crossed the Persian border, nobody asked me for my passport, nobody cared who I was, where I came from or went and why, that is not fashionable here. I have to confess that this first, disorderly impression, when I got to know Persia, was not very favourable for the country. Disorder! Can there be anything worse than disorder?" (p.78).

The book contains telling anecdotes of court life including an account of Korf's official audience with the shah, together with tales of his grandfather and predecessor Fathali Shah Qajar (1772-1834), his father, crown prince of Persia Abbas Mirza (1789-1833), and of Sir John Campbell (1799-1870) British Envoy to Persia in 1830-5. Korf also recounts the details of court machinations attending the succession, the unsuccessful coup d'état by Ali Mirza Qajar, Fathali's son, and of the removal and execution of Mirza Abu'lg-Qasem Qa'em-Maqam Farahani, the prime minister, on the shah's direct orders in 1835. There are topographical notes on Tabriz and environs, Quazvin, Tiflis, Yerevan, and much on the sights of Teheran - the shah's palace, city bazaars, canals, caravanserais, the ruins of the house of Alexander Griboyedov, Russian ambassador to Persia who was murdered by the mob in Teheran in 1829 following the ratification of the punitive Treaty of Turkmenchay, concluding the Russo-Persian War of 1826-8 - together with observations on Russo-Persian trade, the Persian army, native medicine, the celebration of public holidays - Nowruz, Kurban Bayrami, Mourning of Muharram - and the epidemic of plague and cholera in Teheran and Tebriz. A fascinating eyewitness account, by an acute observer, of the state Persia as it opened to outside influences.

Wraps rubbed, soiled and chipped, now restored at the spine, and small piece missing from the front panel in-filled, small ink-stamp removed from the title page, pale toning throughout, but overall very good.