Skip to the beginning of the images gallery
LA ROCHEFOUCAULD-LIANCOURT, François-Alexandre-Frédéric, duc de. 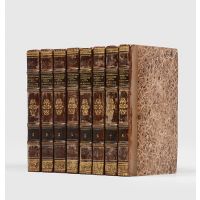 First edition, presentation copy of this important account of travels in the United States and Canada during the last decade of the 18th century, inscribed by the author's son, François XIII, duc de La Rochefoucauld (1765-1848), to Edward Livingston, who served as US Secretary of State in 1831-3: "Offert a M. Edouard Livingston envoyé extraordinnaire et Ministre Plenipotentiaire des Etats d'amérique, près S. M, le Roi des français en 1834: par le fils ainé de l'auteur" (half-title verso in Volume 1). A social reformer and a democrat, La Rochefoucauld-Liancourt (1747-1827), spent five years in exile in North America during the Terror. His travel journals, published upon his return to France, are an incredibly detailed account of the emerging United States and precede Tocqueville's better-known account by thirty years. As he travelled with five companions, covering most of the United States and Upper Canada, La Rochefoucauld-Liancourt jotted down his impressions spanning social conditions, industry, geology, flora, fauna, climate etc. He observed the relations between the white and Indian populations and remarked on the detrimental effects of alcohol. He abruptly returned to France when he learnt that he would not be allowed to visit Lower Canada. A four-volume edition and the first English and German translations were also published in 1799.

Three folding maps, showing the Northern and Southern parts and the United States as a whole, 9 folding tables.