Skip to the beginning of the images gallery
CHOISEUL-GOUFFIER, Marie Gabriel F. A., Comte de 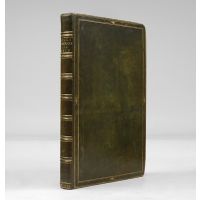 First edition, first issue, the Discours Préliminaire concluding on the fourth line of page xvi. First volume only, but complete in itself, and without doubt one of the most desirable of all 18th-century works on Greece. A second volume was published in two parts, the first in 1809, and the "final biographical livraison was published posthumously" (Blackmer), edited by the cartographer Barbie du Bocage, in 1822. Choiseul-Gouffier first went to Greece in 1776 as a member of a scientific expedition to the eastern Mediterranean on board the Atalante, commanded by the marquis de Chabert, a veteran of the American Revolution, who was charged with the correction of the French navy's charts of the region. The party included Jean-Baptiste Hilaire, considered by Boppe, in his Les Peintres du Bosphore au Dix-huitième Siècle, to be the artist amongst the early orientalists who best understood the Levant, and who contributed the expressive landscapes and well-observed and characterful costume studies; the engineer and architect Jacques Foucherot, who surveyed the archaeological sites and provides the superb plates of architectural details; and Foucherot's secretary, François Kauffer, later to identify the site of ancient Troy at Hisarlik, who was responsible for producing of most of the detailed charts of harbours and islands. The spectacular baroque allegorical tailpieces, most of them emblematic of the islands visited, are the work of Guët, Choffard, Varin, Moreau le jeune, and Hilaire amongst others. The work met with immediate and enthusiastic success, which greatly facilitated the advance of Choiseul-Gouffier's academic and political career. He was elected a member of the Académie des Inscriptions et Belles-lettres in 1782, and of the Académie Française in 1783, and in 1784 became the French ambassador to Constantinople. Following the Revolution he was replaced, but he ignored the recall to Paris for fear of execution, and in 1792 emigrated to Russia where he became director of the Academy of Arts and Imperial Library, finding great favour with the empress. Under the Empire, Napoleon's amnesty to emigrés allowed him to return to France, and at the Restoration he became a minister of state and a peer, also regaining his seat at the Académie in 1816.

A little rubbed and scuffed, corners bumped, some judicious restoration at the head and tail of the spine and to the board edges, light browning and occasional foxing of the contents, but overall very good, and a handsomely-presented copy.