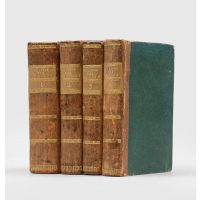 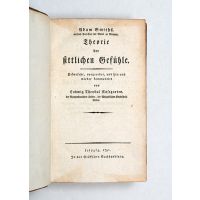 First edition of the much-improved second Russian translation of Adam Smith's Wealth of Nations, reproducing the notes and apparatus from the 1843 Blanqui edition. This translation, published following the growing public dissatisfaction with an earlier version, encumbered with obsolete prose and unspecific terminology, appeared in the Library of Classical European Writers, translated by P. A. Bibikov.
"The first Russian translation of the Wealth, by N. R. Politkovsky, had appeared between 1802 and 1806; in its first volume, the translator himself had referred to the difficulty of rendering Smith's specific terminology in Russian, writing that 'he vas a novice in the subject himself, although Smith also seemed to have some difficulty in elaborating his ideas with clarity'" (Tribe, p.156). "By the middle of the nineteenth century the first translation of Wealth of Nations was increasingly unsatisfactory to Russian readers working in a language that had developed considerably since the early part of the century. Bibikov already had a reputation as a historian, philosopher, and literary critic, and this undoubtedly had a part in the generally high level of presentation of the translations, which have notes, indexes and supplements. However, Bibikov's translation was not made from the English original, but from Blanqui's version of Garnier's French edition, including an apparatus that drew upon the commentary of Buchanan, Garnier, McCulloch, and others, which Bibikov retained in the Russian translation" (ibid., pp. 160-161).

Joints a little rubbed, gilt on spine faded; paper covering on boards a little cockled and worn, lifted in places and repaired. Pale waterstain to first few leaves of volume 1. Without pages 7-8 of volume 1 as in all recorded copies. Withal a very good set.