Euclid and His Translators Euclid of Alexandria is considered the ‘Father of Geometry’. The foundation of our understanding of geometry, algebra, and number theory, Euclid’s Elements has been translated and re-interpreted from the original Greek countless times over the centuries. Euclidean geometry is still taught in schools today.

Although it is largely accepted that Euclid was the author of Elements, the historical references to him as a person were not written until many centuries after he lived, and consequently little is known about his life. Proclus wrote that Euclid must have lived during the time of Ptolemy I because he was referred to in the writings of Archimedes, who lived between 287-212 B.C. The mystery surrounding the character of Euclid has extended to such an extent that occasionally he was confused with Euclid of Megara, a later philosopher whose image had been printed on coins.

Sir Henry Billingsley, a translator and haberdasher, saw a challenge to be had in translating Euclid’s Elements into English for the first time. In a note from the translator to the reader, Billingsley wrote, ‘without the diligent studies of Euclides Elementes it is impossible to attaine unto the perfect knowledge of Geometrie, and consequently of any other of the Mathematicall sciences’.

Remarkably, Billingsley included pull-out sections which illustrated the geometrical ideas in three-dimensions. For early printers, the Euclidean diagrams had presented a challenge. Woodcuts were not fine enough to produce the thin lines and ideal shapes of geometric diagrams. Copper engravings, being printed in a separate process on plate paper, were expensive and complex to align with the passages of text. While metalcut diagrams printed in the margins were a solution for the first edition, new problems arose in later books when Euclid went on to explain the solid geometry of three dimensions. In this respect, the edition was innovative, folding paper cut-outs were used to illustrate three-dimensional geometry for the first time in book design. 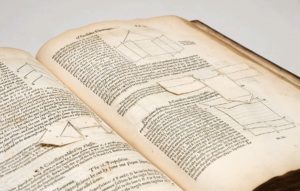 Billingsley’s 1570 text also included a ‘Praeface’ by John Dee, who classified and elaborated upon the mathematical arts, as well as correcting a few of Billingsley’s errors. Dee was a trusted advisor of Queen Elizabeth I in scientific and astrological matters and his preface became widely influential.

Henry Billingsley’s translation owes much of its success to Dee’s preface. Although Billingsley’s work was original in its own way, Dee was a well-known figure in academic circles, famous for dabbling in magic and later studying alchemy. In 1563, some years before writing his preface, John Dee had visited Federico Commandino in Urbino. Upon this meeting, Dee gave Commandino a manuscript of the Latin translation of an Arabic work related to Euclid’s ‘On Divisions’, of which the Greek original is lost.

Commandino produced his own translation of Elements from Greek to Latin in 1572. His volume may not have included the technical innovations seen in Billingsley’s, but his Latin edition has been widely used in the learning of geometry.

Almost three hundred years after Billingsley’s English translation, in 1847, Oliver Byrne produced his own translation (BOOK SOLD). Byrne was a civil engineer by training, who was appointed surveyor of the Falkland Islands and in the 1850s spent time in the USA promoting the cause of the Irish revolt against British rule. Byrne wrote many works on mathematics.

What set Byrne’s edition apart was his particular interest in the educative function of Euclid’s Elements for children. His version had as little text as possible, instead illustrating the complicated theories using diagrams laced with primary colours.  Much like Billingsley and his printer had attempted to do hundreds of years earlier, Byrne was attempting a new visual representation of mathematical theory. Upon seeing Byrne’s pleasingly geometric illustrations, one is immediately struck by the resemblance between his works and the later modern art movements of the early 20th century especially the Dutch De Stijl movement.  His use of primary colours and placement beautifully capture the purity of plane geometry in the same way that the De Stijl movement sought to refine art down to its most basic components.

Some years later, Sir Thomas Little Heath (1861-1940) also undertook a translation. An excellent civil servant, Heath was known for his honesty, accuracy, reliability and technical knowledge. These elements of his personality, combined with his study of classics and mathematics at Cambridge placed him in good standing to translate Euclid’s Elements into the English of the 20th century.

There is little doubt that Heath would have been familiar with Euclid’s elements, as not only was he one of the world’s leading authorities on Greek mathematics, but he owned the very copy of Billingsley’s translation which Peter Harrington has acquired. Heath’s pencilled ownership inscription is on the flyleaf, dated 17 March 1900, dating from the period when he was gathering materials in preparation for his own edition. In 1908, he produced his own impressive three-volume edition of Elements.

Without the obscurity that Byrne had about him, Heath’s position in the public domain and his standing in the mathematics community meant that his English translation has remained a favourite, despite lacking some of the charm of Byrne’s artistic endeavor. Heath maintained Euclid’s strong logical choice of axioms and his infallible order of proof, and instead left his mark on the work in the accuracy of his translation.